Recently I’ve been having a lot of fun with mounted archery.  Since forming our club Apex Mounted Archery I’ve been going to practice about twice per month.  To see just a few of the trips let’s revisit the articles below:

Recovering From The Stress Dump

Cross Training On The Weekend

At home when the time allows I also have begun my own practice….

Part of training horses to accept mounted archery is to begin acquainting them with the noise.  The noise of the quiver, the arrows, the bow releasing, and the sound of the arrow hitting it’s target (or not).

Back in June I began to shoot archery on the ground in the paddocks.  Happy could care less about any of it and Blade wanted nothing to do with the arrows.  I was,  however, able to rub my bow on both Happy and Blade.

What’s my goal here?  For over a year Blade was unable to comfortably canter due to joint pain.  In addition he’s infamous for being flighty.  For the last month (so far) I have been able to ride Blade in a very comfortable canter.  No Pain! I am overjoyed by this new development.

Despite this, I’m still not sure that he’d be a good ride for mounted archery.  Even so I am using the time to train and desensitize him to it.  Not only do I get experience training, but it gives me quality time with Blade…plus he gets to use that brain of his.

By July I decided it was time to step it up.  With Zac by my side I had him hold Blade to graze 10 feet behind me while I shot my bow.  He was unfazed. I then had Blade by my side while I shot. Still unfazed.

Before this I had taken the bow and rubbed him up and down with it.  I had also taken an arrow and done the same….and again with the quiver.  The quiver was the most challenging since it made a lot of scary noises.  We got through it.

The next step had me standing on a block with Blade directly in front of me so I could shoot over the top of his back.  Again, only one round of arrows and Blade was calm…licking and chewing.  He was given a lot of praise each with each arrow.

Once and for all…Zac walked Blade in front of the target while I shot the target.  Blade took an extra step each time but by the second round he was very comfortable.  I also made sure to tap him with the quiver while I was on top of him to get him used to the idea that he might get touched by it periodically.  I was ecstatic with how far we got in only 1 day….1 hour to be honest.

While Zac was working on the barn I decided it was a nice day for a ride.  Blade was performing very well so I took out the target, the bow, and the arrows.  Zac was nearby and outside so if something went wrong he’d know.

To start I let Blade get used to walking while I lifted the bow and aimed.  He seemed good so I fired.  He looked and settled right down as I praised him.  A few more times and he was only better.

On the next round I began to trot.  Again, this horse looked but relaxed with praise.  We managed to get a few rounds done at the trot.

….and I’m not touching him at the canter yet.  No thanks.

I am astounded daily by what this horse will do for me.  A horse that, at one point, spun and ran when another horse’s hoof tapped a jump rail.  A horse that my friends wouldn’t trust.

..and yet he’ll allow me to do mounted archery on him.

It goes to show that you absolutely can accomplish some great things with your horse if you are patient and consistent enough.  What has worked best for me is to approach things with no expectation; I’m never disappointed! 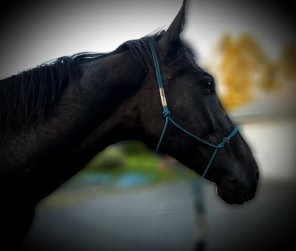 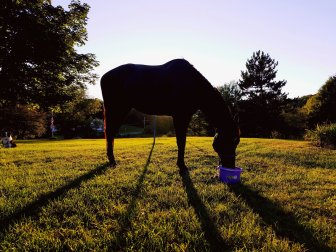