After last week I’ve been a raw nerve.  Even writing this on Tuesday morning I have been struggling with my nerves and stress.

Last Friday I began to recover from the previous stress dump.

I took the bow and arrows outside to the paddock.  If you read Putting the Vitals to Use you probably already knew that.  I brought Blade back into the paddock with Happy.  While I was monitoring him I shot a few rounds into my target.  The horses were happily picking the hay nets and didn’t seem to mind the noise.

Saturday was the real day for me to unwind…. 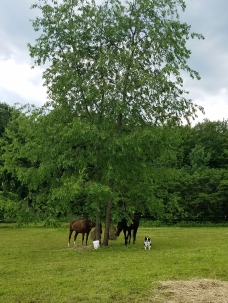 Saturday morning I woke up nice and late.  I fed the horses and ate breakfast with Zac.  Before I knew it the clock read noon and I had to be at my clinic in an hour…I live 45 minutes away.  I left my coffee and got on the road.

Despite the short time-frame I made it to my clinic exactly on time.

Remember back in May I wrote about New Experiences?

My clinic was for Mounted Archery and this time I was attending the next level class.  I wasn’t sure what to expect but I was excited.

Our group was smaller and we began with a quick practice loading and shooting on the ground.   In no time we were ready to get on and ride!

This time there was a lane made using ground rails and barrels.  We each took a turn shooting at a walk or trot while the instructors led the horses.

On my second trip the lead line was removed and I was on my own; the first person of the class to go without a handler.  Loading a bow and shooting is one level.  Riding it is another.  Now I’m loading shooting, riding, and relying on my legs and seat to control the horse!

Non-horse people can’t comprehend what a tall order this is and how much coordination is needed to accomplish mounted archery. Non-horse people may think we just sit there on the horse and if we can do each thing separately then certainly doing both together should be simple.

I have been underwhelmed by my non-horse friends’ reactions to the photos.  I am so proud to share them because…how many people do this kind of thing?!  When the response is an unenthusiastic “neat” I just want to scream “do you even realize how cool this is?!”

I guess I’m just that excited.

Horse people might notice my equitation is lacking.  As I focused on the gross motor skills of simply loading and shooting with movement my riding was waning.  The stirrups were also very long so in order to put weight in them my heels had to be lifted.

On the ground I have been pretty good about not bruising up my arm with the bowstring.  Once I began riding my arm was quickly turning colors.

With practice my form will improve leaving my arm unscathed and my equitation will return.  For now I’m a little messy; refinement will come. 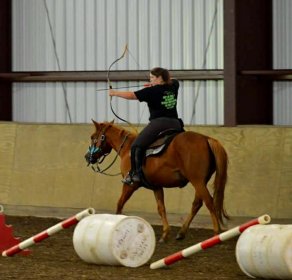 I began getting comfortable by going a few times around at the trot on both Max and Scooter.  Nobody had taken Scooter to the next gear yet at this point, so I did.  He has a beautiful and comfortable canter; if I steadied my seat Scooter relaxed into a nice rhythm.  I was beginning to get comfortable with it, but still struggled to properly load my bow.

There’s a joke/wager going around that whoever canters Max gets $20.  Despite my best attempts I was unable to get Max into a canter.  As a former cart horse Max covers a lot of ground at the trot, but rarely will break to a canter.

Though I have a long way to go I am extremely encouraged by Saturday’s experiences.

Later in the clinic a small jump was made and without hesitation I hopped on Scooter to take the first shot at it.

Let me be clear.

We were riding in western saddles. My short legs barely fit in the stirrups. I had never jumped Scooter.

We approached the jump and Scooter died out.  I allowed him to look at it first and we looped back around and committed.  I had long loose reins in one hand and my loaded bow in the other.  I did my best to get enough lift out of the seat using my legs and abs to help Scooter over the pole (since the stirrups were long).  Scooter took a big leap and were were off and away! We timed it together well but I hadn’t expected the power he’d put into the jump.  I was bounced a bit and when we landed we took off.  As we turned the far corner I slowed him with my seat long enough to get an arrow off, but I don’t remember where it went…..

…it went in the general vicinity of the hay bales.

After that the group decided to forgo the jump….but not before I got to have a thrilling lap and a great photo!

As it stands now there are plans to start New York’s first mounted archery club called Apex Archery.  I am beyond thrilled.  I have never pictured myself doing this before but I’m really enjoying it.  It’s exciting and an adventure of my own.

Learning to trust the horse and ride without reins is foreign to me.  It’s a beautiful concept and I’ve been really focusing on my leg and seat cues when I ride at home.  I could go on but I’ll leave it for another day.

With practice I’m hoping to become proficient and maybe even join the competitions.

I returned home just in time for Zac and I to grab some food and head out the door again.
This time for fun without horses.

On Monday 6/4 I was driving home from work listening to the radio station.  They usually play trivia and I just listen in.  For whatever reason I decided to call.

…a majority of people will travel 150 miles for this.

I finally got through and gave my answer. Somebody had already guessed correctly while my phone was ringing, but they allowed me to play anyway.  I said “a concert” and they gave me a prize!

The prize was two tickets to see the Albany Empire arena football game on Saturday night.  I was scheduled to work on Saturday but somehow my boss managed to find coverage allowing me to attend the game.

It was so much fun!

Regardless, the tickets were free, the escape was needed, and the game was a lot of fun.  I may not tune in to sports but I’d happily attend another game soon!