I am so honored to be sharing this special interview with you, Green Horsemen and Horsewomen!  This week I am bringing in a spectacular young woman named Samantha VanFleet.  If you follow the Green Horseman’s Facebook Page you might remember a post I shared in April about one of her mustangs.

When I attended The Extreme Mustang Makeover in 2017 I had the opportunity to watch Samantha’s first adult EMM competition with Mustang Malibu.  Malibu is a beautiful black mare who found a great Florida home at the end of the competition.  Sam also participated as a youth competitor in 2014, 2015, and 2016.  Since then she has gone on to partake in other Mustang Makeovers, Mustang Magic, and is a TIP trainer (Trainer Incentive Program…see also: Money for Mustangs?! Here’s a TIP).

I began following Sam’s pages and quickly fell in love with her methods.  She has a gentle nature and it’s obvious her horses truly trust her.  Whether training in or out of the saddle Sam is a very talented horseman and a very hard worker.

Miss VanFleet grew up in western Massachusetts likely within an hour of my home but she lives and works in Florida today.  I was so excited to hear back from her when I reached out for an interview.

I was already a big fan of Samantha VanFleet before, and our interview has only made me more excited to see what’s next for her. 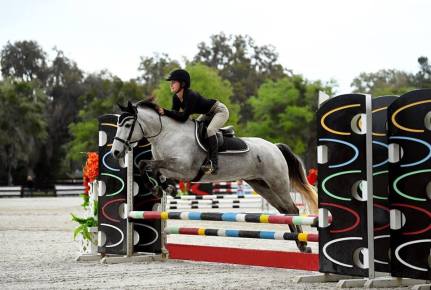 Samantha VanFleet (SVF): I started competing in the Youth Extreme Mustang Makeover in 2014 and I’ve been doing the makeovers ever since. I only started working with horses about two years prior to my first mustang… so I wasn’t around horses in general for very long. No one in my family is a horse person, so it was a little difficult trying to navigate around the horse world on my own. Mustangs came into my “horse life” fairly early on.

GH: Was the youth mustang makeover your first experience training?

SVF: Although though the youth makeover in 2014 was my first official training experience… I did volunteer at a draft horse rescue where I was able to work with horses at various stages of there rehabilitation and training before my first mustang. When I was there, in 2012 I adopted a 7-year-old draft cross PMU foal who needed a lot of work. She was surrendered to the rescue for being too much horse, and the owner didn’t want her anymore. She was difficult to catch and halter, and she was nervous. She would push you around and had no manners. By 2014, we were showing on the A-circuit jumpers. She was my first training accomplishment.

GH: I admittedly haven’t read ALL the youth mustang makeover rules, but do they allow adults to assist?  And did you get assistance with your first competitions?

SVF: They do allow adults to help. It’s encouraged for the youth to do it on their own because it’s a great learning situation for them, but if the horse is a little more wild, there are no penalties if an adult helps. The age they start allowing youth to do the makeovers is eight, which is pretty young, considering they would also be competing against 17-year-olds. With my three youth makeover horses, I didn’t get any help. I was 15 when I started doing them so I was big enough to be able to handle my mustangs on my own. I think I learned a lot more solving problems I encountered on my own! 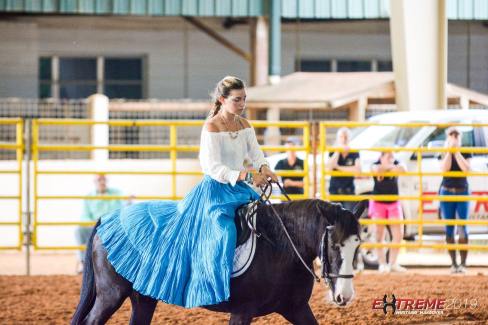 GH: What is it like to work with and compete with some of the “big names” in Horsemanship?  I am particularly a fan of Lindsey Partridge and Elisa Wallace but I know there are so many other really well known horsemanship practitioners at these events.

SVF: Initially it was a little scary! But I do the makeovers more for the horse than the competition aspect of it. My focus is on developing a solid trusting partnership with the mustang and other competitors don’t affect that. Once you’re in the mustang community for a while, you realize how helpful all the trainers are to one another. The mustang world is like a big family.

GH:  When you’re not doing the EMM or Mustang Magic what else do you do?  Do you train client horses? Teach?

SVF: Even when I am training for a mustang makeover, I have other responsibilities. I work at Prosperity Farms, a warmblood breeding and training facility in Williston Florida. We have training horses year-round. The warmbloods that grow up there get groundwork until the ages of 3 or 4 where they are then started under saddle and sold. We also take in client horses for training… everything from Quarter Horses to Paints, Andalusians to Welsh ponies! I help with the mares and foals when they’re born too. Taking care of the farm is a big part of my life too, we have about 60-70 horses on the farm so that takes up a good majority of the time between regular care and chores as well as vet and farrier visits.

I also started traveling to teach lessons and clinics, but this year it all just got so busy so I’m holding off on traveling to teach again until next year. I have a YouTube channel that I film, edit, and upload training videos to. Every year for about 3 months, I leave the farm in Florida and travel for internships so I can continue my education. Last year I took my internships in the summer, this year I’ll be taking them in the fall time. There’s a lot to do, but it all connects and fits in somehow!

GH: Was there a specific moment in your life that you were like,  “THIS is what I’m meant to do with life”?

SVF: There was never a specific moment where I thought this is what I was going to be doing… it just happened. Some days I don’t know how I even got where I am. Less than 10 years ago, I had never even touched a horse before. I was a competitive all-star cheerleader. I had no idea I would be where I am! Over time it just developed to be where I am now.

GH: Can you describe a pivotal moment in your relationship with horses?  Maybe you made a mistake or learned a valuable lesson that altered the way you think about or work with horses now?

SVF: Every day is a learning experience with horses. It’s really about listening to the horse. I was once told that performing and showing with horses is about you and the horse is your sidekick… when someone told me this I just politely nodded and hoped the conversion would change. In my head I was completely disagreeing. That’s when I realized that my thoughts might be a little different than some. The horse isn’t a prop to me… I’m helping them learn as much as they’re helping me learn. I listen to them because I want them to enjoy their job. I don’t want it to be forced and I don’t want them to resent me.

GH: Who are some of the people that inspire you to become the best version of you?

SVF:  My horses inspire me to be the best version of myself. I don’t study under any specific trainers and stick to their methods strictly. There are a few horse people that I look up to like Mirka Crew and Mustang Maddy. I can find inspiration in many people however, they don’t have to be horse people.

GH: I see you spend a lot of time between Massachusetts and Florida.  Are you willing to elaborate (is it seasonal like many northern equestrians)?

SVF: Currently I spend the majority of my time in Florida. Massachusetts is where all of my family is, so I come up a couple times per year; for the most part I stay in Florida and travel around the country by truck and trailer. It’s not seasonal; I come up for holidays or clinics since I’m still better known up north than down south currently.

GH: What are a few goals you have professionally? Are there any personal bucket list items you’d like to accomplish?

SVF:  It may sound bad, but I don’t have many goals. I’m more of a “go with the flow” kind of person, and life will take me wherever it does. I try to take every opportunity I’m offered. I find that if I set goals, I’ll be focused on getting the goal, and nothing else in between. If I focus on one goal specifically… I may overlook the path to another outcome that’s even bigger and better.

GH: I shared with you my brief background; 20 years in and out of the horse world.  Finally, at 26 I got my first horse.  Brought him home when I was 29.  I have cared for horses throughout my life.  Still, I am so daunted by the thought of training a wild mustang or even starting a youngster.  I’m terrified by the thought that I could totally screw this animal up if I do the wrong thing.  What are your thoughts?

SVF:  Training mustangs or starting young horses isn’t for every equestrian, but it’s something everyone should try at least once. If you go slow and listen to the mustang, you’ll get farther than you think. They teach you so much that will help you with other horses, and even yourself in non-horse situations. As long as you stay patient and calm, a mustang is a great way to improve your abilities. 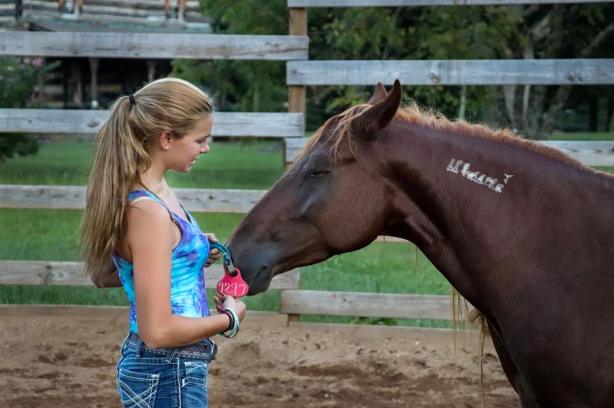 GH: Is it even possible to train a mustang when one’s already working a full-time job?  How many hours per day do you spend with each of your mustangs (on average since I imagine it fluctuates).

SVF: Yes. Most people that do the mustang makeovers have full-time jobs. I work from about 5 AM until 8 PM, between the horses as well as social media and videos. In that time, at least an hour is for the mustangs I currently have. Ideally, I’d love to work a makeover mustang 4-5 times a day for 30-60 minutes each time… but that has never happened. I usually get about an hour a day with each mustang if I’m lucky!

GH:  Do you have a favorite motto or mantra?

SVF: Listen to the horse.

GH: What was the name of your first horse?  What breed was it and what was it like?

SVF:  My first horse I adopted from a draft horse rescue. Her name is Calliope (I gave her the show name of ‘Mystic Jewel’) and she was a PMU foal. She was 7 at the time I adopted her and she is a Clydesdale QH cross. She’s about to turn 15 and she is the best thing that has ever come into my life. She is the sweetest horse I’ve ever met. Calliope was terrified and just wild when she came to the rescue, and she’s just my best friend now. We’ve been through it all together!

GH:  If you could change something about the horse world what would it be?  (example: a way people see or train horses, something many people do that drives you crazy, something you wish more people would do, some information you wish people would know).

SVF:  I wish more people would listen and tune in to their horses. They hear a lot better when you whisper rather than yell. Again, your horses will tell you a lot if you just listen to them.

Samantha VanFleet is an inspiration and I really enjoyed the opportunity to interview her; her hard work ethic and gentle methods are something we should all aspire to as horsemen, friends, family members, and coworkers.
As for me, I will NEVER forget…

“Listen to the Horse.”

Visit and Subscribe to Get More Updates from Samantha VanFleet