I work overnight 12 hours shifts and get 3-4 days off each week.  I don’t always transition back to days on my weekend, especially when Ionly have the 3 days off.

So I’m sitting on my floor at 2AM…the man has gone to bed and I’m left up with the kitties.  What do you think I’m doing?

I’m horse-crazy through and through.

Since I posted Blame It On Heartland it has been brought to my attention that Amazon Prime/UP has Heartland Season 10 available.

As it happens I accidentally signed up for the Amazon Prime free trial this month.  Guess I better use it!

In three days of my last vacation I’ve completed Season 10…. 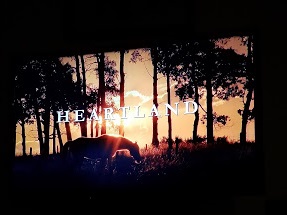 My first attempt a few weeks ago didn’t go so well and sadly I didn’t even think to take a picture of the pitiful thing.  It was tiny and there was no way you could get hay into it.

This one was better, but not by much.

I began using baling twine obtained from small square bales.  I tied two lengths together and used 15 double length strands.  I ran out of baling twine and in my impatience idiotically grabbed an odd amount…. 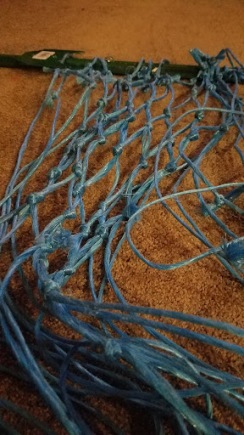 Fifteen.  Let me start out by saying using an odd amount will NOT work very nicely.  After all you are tying TWO strands together….sometimes my brain cells don’t function properly.

I also soon realized that even 15 was too few for what I was going for.  I would have been better off saving a few more to make 20, or maybe even more than that. Ideally I want it to go around a small square bale without much fight and hold 2-3 flakes.

To start, I made a loop around a T-Post.  You can use anything, I chose this because it helped make a nice loop and provide good tension.  I tried to make each loop uniform so the knots lined up.  Unfortunately since it was already used to bale hay some old knots can be tricky to get around.

Once the first knots have been made I began to make the net.  I eyeballed about  1.5″ from each strand and made a knot, continuing until my first round was made.  For the next knot I took another 1.5″ from one strand and tied it to one strand from an adjacent knot.  I continued this pattern until it was complete, and then made a large knot at the end. 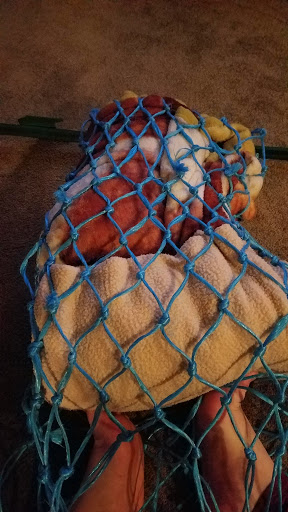 It’s imperfect and not very uniform.  It’s even a little too small.  One thing for sure, however, is that it came out better than my first attempt. 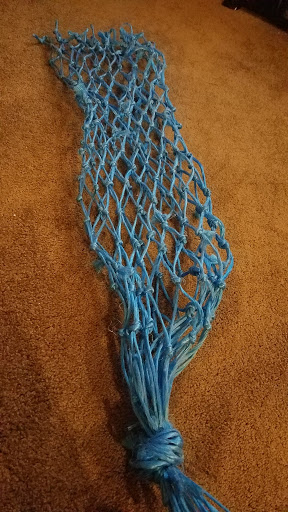 Did I mention I got help from Kain? 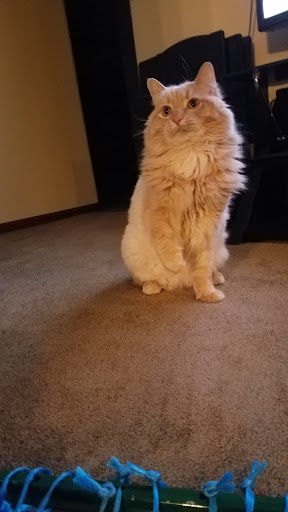 So here I am, at 2AM…3AM…4AM…5AM, watching Heartland and making a haynet with my cat.

In my next attempt at a hay net I’m going to be using more twine, and I’m going to make my knots more uniform.  I will also be singing the ends of the twine to prevent fraying.  Once I get a well functioning design down I might try using para-cord, but let’s not get ahead of ourselves.

Have you made your own haynet before?

Do you have any tips?

I did, however, finish Heartland’s Season 10.  Although Ican’t wait for Season 11 to become available I believe the writers left us in a great spot to wait a while. As with Season 9 I’m not left with a sinking feeling that I MUST FIND OUT WHAT’S GOING ON THIS SECOND WITH THE NEXT SEASON.  I’m comforted knowing there IS a season 11, but I’m at peace with where it left off…except that is, that I’m crying for Lou.

Gosh I wish I could say more!

If you haven’t begun watching yet you better get on board.  It’s difficult to talk about without giving anything away.  As with the other seasons there is love, fear, drama, heartache, and triumph.

What season of Heartland are you on?