Tiger was present for all of the events on December 11, 2019.  He and Blade were playing when it happened and he tried to comfort Blade the best he knew how.  When Blade was down he nudged him to get up.  He stayed close.  The concern on his face spoke volumes.

Once Blade was up Tiger continued to monitor the situation.  He gave us space when we needed it but didn’t stray far and checked in periodically.  He nipped at Blade’s broken leg.  I don’t know exactly his intention and I swatted him away but I imagine in a horse world it made sense to him and Blade.

When Blade grew restless Tiger came over and stood close.  He allowed Blade to lean on him.

Tiger participated in begging me for treats.  He definitely got some, but Blade got twice as many.

Once the vet arrived Ashley put Tiger into the round pen with some alfalfa.  From there he was able to see everything that was going on without getting in the way.  He was as much a part of the trauma as we were and had every right to know what was going on.

After everything was done and after I was able to wrench myself off of Blade’s neck, I took Tiger’s lead and all of us made our way down the hill to the barn paddock.  Tiger stopped halfway down and looked back towards Blade.  A sad half-hearted whinny came to cut the silence.  After giving him a few seconds to say his goodbye we got back to the barn.  He ate while I changed his blanket, kissed him goodnight, and returned to the house to warm up with mango ginger tea.

The next morning after Blade was buried we took some alfalfa to his grave.  Tiger and Blade “shared” a flake together.

Our friend had taken Blade’s sheet off and hung it over the round-pen fence.  I walked Tiger over and he took a long time taking it in.  In those moments Tiger’s expression changed.  He grew noticeably saddened.

All day long Tiger mourned his loss, standing in the same spot for hours on end. 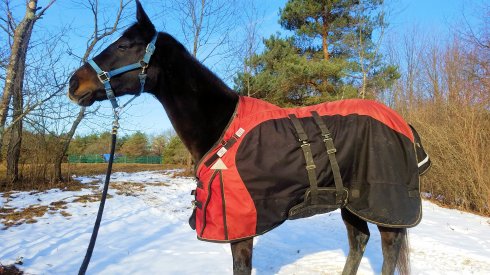 Only when I came out to check on him (and I did often) would he half-heartedly eat his hay and take some treats.

He still ate his meals and devoured his alfalfa, but he had no interest in hay.

I went to the store and bought two bags of shavings.  I typically bed the run-in shed with wasted hay but for this occasion, I wanted to give him ANYTHING that could provide comfort.

I became worried Saturday when I came out to see him greet me with a stressed head bobbing motion.  He hadn’t touched any of his hay all day long.  Not even nibbled it.

While he ate his dinner I grabbed a book, flipped a muck bucket over, and read aloud to him.  I spent time with him and let him listen to my voice. 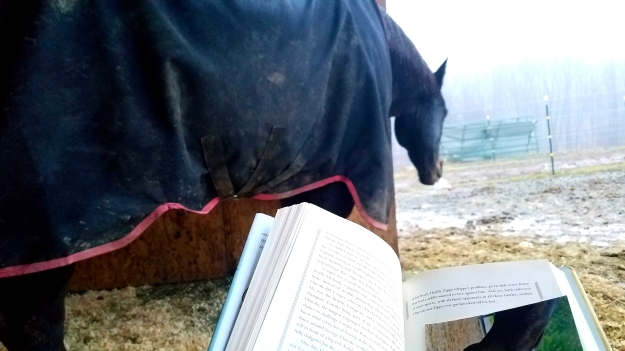 Non-horse people would think I’m crazy for it, but let me assure you….it made a difference.

Tiger ate a lot more that night.  In the morning he greeted me with a happy whinny.  He devoured his food.  While I began to clean up I noticed he was playful.  His expression had changed immensely since the night before.  He knew I was here for him.  Knew that I love him.  Knew that he wasn’t really truly alone.

Tiger may be healing faster than I am, but I still worry about his mental state living in solitude.  The whole reason he’s here is because I didn’t want Blade to be alone.  Now the tables have turned all too fast.

It didn’t take long for friends to reach out to offer up loaner horses to keep Tiger company.  I was offered horses to borrow and horses to keep.  I knew I needed to decide on something but I wasn’t ready for a permanent decision.

Knowing Tiger’s horsonality I wanted to figure out a solution that would be the best fit for HIM.  He’s a baby.  His mindset is still immature.  He’s sweet and impressionable but he’s also a brat and can be dominant.  He lacks manners.  I wanted to decide on a horse companion that would be suitable for his immaturity.

Do you remember any of the horses from my horse shopping in The Green Horseman’s Latest Quest?

Nahe is a sweet and incredible paint gelding of about 14 years.  He’s big, too.  He belongs to a friend who offered to let me borrow him to accompany Tiger.

Nahe is a big boy.  He’s sweet and has a very kind eye.  My friend told me that he is the top dog.  He asserts his authority but he is not mean. Just the boss.

This is precisely what I feel Tiger needs.  He needs the leader to keep him humble and teach him manners.  A leader that won’t put up with shenanigans but won’t be cruel, either.

Nahe arrived at our home Monday afternoon.  He stepped off the trailer quietly and we introduced the two.

Within 10-20 minutes Nahe and Tiger were new best friends. 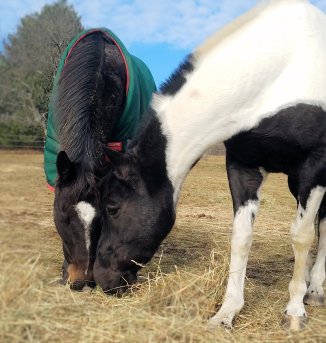 I watched them for a while and they happily shared a hay pile despite my having laid out 2 or 3 piles.  My heart sang knowing that Tiger had a friend.  I knew then that he would heal just fine and that I can rest easier.  I’m still broken-hearted about my loss but my heart healed in a major way that day. 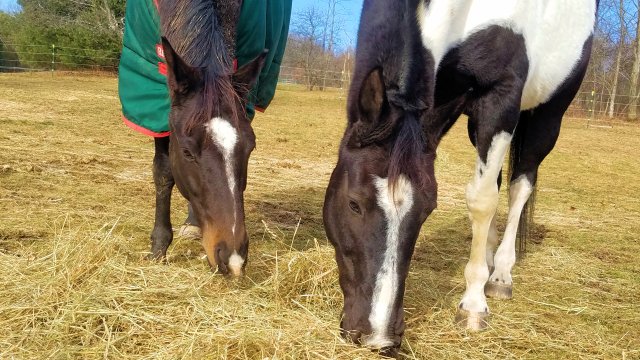 We don’t have a solid plan on how long Nahe will be with us, but we are both so happy and so grateful to his owner for trusting me to provide him with the same excellent care I’ve given my own horses.  So grateful that she was able to deliver him and offer Tiger and I some respite.

From the bottom of my heart…