**Disclaimer: This is a post illustrating the events that occurred on December 11th, 2019.  There are no gory photographs and no truly graphic details but it will not be an easy happy and uplifting read like most on The Green Horseman**

That Wednesday I called out sick from work because I was still weak and shaky from the food poisoning Zac and I both had Sunday night.  I made arrangements with a new friend to pick up a saddle pad I had custom made for Tiger.  Mid-afternoon I brought dinner buckets out to the pasture.  It was a “warmer” sunny day…temperatures were mid-thirties.  I left their lightweight sheets on but they were enjoying the day and even finding some grass to nibble on.  The snow was gone.  No ice.  Just soft ground and some mud in the bare areas.

Blade, as always, came to greet me.  Before feeding them I greeted him and gave him love.  Blade celebrated the weather and upon seeing me decided to show off in his normal fashion.  He turned and took off up the hill toward the large paddock.  At the top of the hill, the ground is soft and dry; it has good drainage, good soil, and good plantlife.  The footing is good.  It’s where I do a good amount of riding.  It’s where my round pen is located.  It’s a beautiful space. 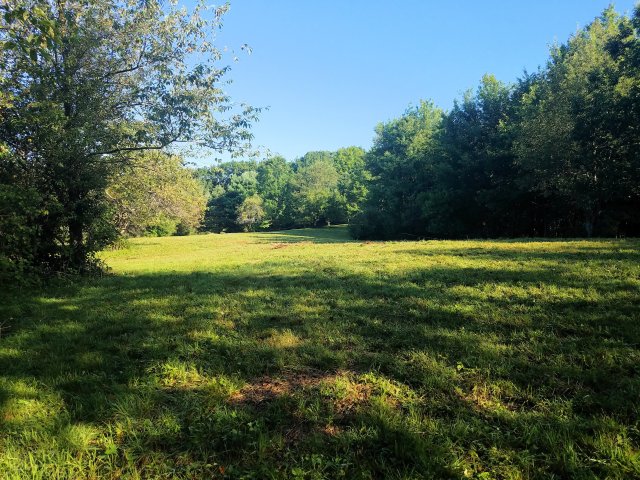 I watched happily as Blade and Tiger merrily chased each other.  Heels in the air.  They made several laps around.  Blade came back down the lane to check in with me then turned around to show off again.  Another few laps.  There was so much pride.  So much joy.

That’s when I heard it.

I saw Tiger’s head pop up over the hillside.

But where is Blade?

I heard Blade grunt and my heart sank.  I took off running up the hill.  I was about 500 feet away down the hill. I ran up and across the level top to his side.  He was down…struggling to get up.  I first laid my hands on his neck (he prefers neck over face) and told him “I’m here.”  I kissed his big head and assessed what it was we were facing.  On his next attempt to get up I realized then the gravity of the situation.  I didn’t have a coat nor a phone.

I had to force myself to leave his side…get into the house.  Get warm clothes and a phone to call the vet.  I sniffled through a short call to the vet.  I grabbed a halter.  I called Zac and at this point, I’m full-blown ugly crying. I’m surprised he understood the words I spoke, but he knew it was bad and replied with “I’m leaving now I’m on my way.”

Halfway back to Blade I realized I forgot the Banamine (pain reliever).  It was the ONLY help I could offer him at that moment so I grabbed it along with a whole bag of his favorite treats.

As I returned to Blade’s side he greeted me standing up.  He had so much will and determination that he picked his broken 1200-pound body off the cold Earth.  He was in shock.  Hyperventilating.  Shivering.  I gave him an extra-large dose of Banamine and a handful of treats.

Standing with Blade I texted my closest circle of horse friends…at least a couple of them.  My longest known friend, my friend since childhood….called and said: “I’m leaving now I’ll be there in 40 minutes.”  No questions asked.

I got most of my ugly cries out while it was just Blade, Tiger, Bardi, and I on the top of that hill.  Blade was in shock.  Hyperventilating and shaking.  We did our best to comfort each other.  He relentlessly kissed my face.  He rested his head on my shoulder.

Periodically he held his dangling leg…a completely broken canon bone out in front of him as if to say “Mom, I’m hurt can you fix this, please? Make the pain go away.  Make me better.”  It broke my heart that I couldn’t do anything.  He calmed down and breathed when I rubbed the shoulder of the broken leg.  I acknowledged it and that’s what he needed at that moment.

Broken legs can sometimes be fixed given the severity and location.  Looking at his I instantly knew this was not the case; this was a catastrophic break.  Even if it were “fixable” surgery comes with a lot of risk to horses.  They don’t understand anesthesia.  Vets can do amazing work in surgery only to have a horse wake up in a fit of panic and destroy everything in a matter of seconds.  Even if it were “fixable” and even if the surgery went well, recovery would mean months of stall rest and an extremely unhappy horse.  Blade was never as happy in a stall as he was with 24/7 turnout.  He needed to move.  To see things.  To play.

Blade began getting tired on three legs.  He kept looking around at his left side.  I have a suspicion that more was hurt than just the leg.  As he tried to pivot and move his weight-bearing legs Tiger came to be next to him.  He offered Blade something to lean on.  He acknowledged Blade’s leg with the confusion and curiosity of a child.  He knew but didn’t fully understand.

Zac grabbed a flake of alfalfa.  Blade ate the bag of treats and readily devoured the alfalfa while we waited for the vet to arrive.  When she did, we moved Tiger to the round pen to allow us the space to work.  He was only 20 feet away so he was with us and could see everyone.  We occupied him with a flake of alfalfa.

It only took the vet a minute to confirm my original assessment and prognosis.

“Even if this was Barbaro I’d have a hard time.”

It was nothing I didn’t expect.

Years ago I began preparing for this day…not realizing the day would come so soon.  I looked up “what to expect.”  I researched costs and planned for it.  I even watched videos of the dreaded thing.  I wanted no surprises back then and I AM SO GLAD I DID

The vet began immediately by administering a sedative.  I was relieved to see him relax if only for a few moments.  Our vet explained what to expect in the next few moments.  I barely listened because I was in an out of body state so I’m glad I had researched earlier.  I nodded.

I gave him more kisses.  Rubbed his ears.  Kissed that perfect star on his forehead.  I nodded and the vet stepped in to administer a lethal dose of pentobarbital. I stepped back to allow him space.  In seconds Blade gracefully rocked back and then down onto his good side.  Once he was down I ran back to his side, kissed his face, and laid with him.  I stayed planted there as his soul departed and left behind his broken body.  Only when I could feel his body begin to get colder did I get up.

In a bundle of confusing emotions, I smiled as I realized he still had leaves of alfalfa hanging out of his mouth; he had so much joy eating alfalfa over the years.  In horse heaven, there are fields of it.

Horses have no concept of time.  Blade didn’t have plans for tomorrow.  None for next week or even next month.  The most precious gift I was able to bestow on Blade was the peace of an easy passage and being by his side to comfort him.  He knew love and happiness until the very end.

He was not subjected to risky surgeries or months of stall rest.  The cost of saving my broken heart is not worth the sacrificed quality of life and the damage to his body and psyche.

Zac and Ashley were by my side.

Zac.  He probably ran the hill up and down ten times that night.  First to see me.  To help Ashley find me.  To bring a halter and lead for Tiger.  To bring alfalfa.  To help the vet find me.  As a non-horse person, he cared so much.  He cried by my side; shared my pain with me at that moment.

Ashley.  A friend and horse lover since we met at a nearby horse pasture in second grade.  We grew up and she took to farriery and has a couple of amazing horses.  She helped move Blade the very first day he came home in 2015.  She helped him move to our new farm a few months later.  She’s an excellent farrier and he loved her doing his feet (until I moved too far away).  She was even the person to pick him up and bring us to the hunter pace this fall.  She’s seen Blade at his best and at his worst.  She’s seen him grow and turn into a wonderful partner.  I couldn’t think of a more perfect person to wish him goodbye than her, standing and crying with me by my side that night.

I owe these two (and others) a debt of gratitude for their love and help through one of the worst nights I’ve ever experienced.

The next day Ashley’s boyfriend came to lay Blade in his final resting place. He took care of everything and told me to go do anything else…to not be present.  I was more than willing to oblige.

For the past week I have been humbled by the amount of love and support I’ve received in response to the news.   As it turns out I am blessed to have a ton of amazing people that love me.

The love shown has helped me get through this tough time.  Oddly I’m okay. It is surreal for sure. Mourning yes. Hurting yes. I still break down and cry daily.

I’m relieved that I was able to make the right decision for him and end his suffering; I’m relieved the decision was obvious and there was no grey area…no asking myself “did I do the right thing.”

I’m glad I was there so he never had to lay there alone looking for me.

I promised him till his last breath and I honored that promise. I always did right by him and more so I’m comfortable knowing he lived his best life. He had a bag of his favorite treats and he still had a mouthful of alfalfa when he died.

It was the best situation in the darkest of hours.

For the rest of the week, I will be posting daily so I hope you’ll visit again soon.  I have so much more to say.   More updates to give.

I’ll tell you all about Blade and the horse I loved.

I’ll update you about Tiger and how he’s coping.

It won’t be as dreadful, I promise.