Mom and I have had some really good times together but three weeks ago she hurt her ankle getting off the ATV.  Against everyone’s advice she decided to forego the doctor and play “wait and see.”

She couldn’t walk the first two days and for the rest of the week she was on crutches.  She spent a lot of time indoors elevating the human foot with ice.  She also took a lot of ibuprofen.

Mom hurt her ankle on a Monday afternoon.  Would you think she slowed down?  Nope.

On Wednesday despite everything, she put the western saddle on me and we went for a trail ride.  We walked all over the farm and we even walked down the street.  She has shown me how to stand quietly next to the ATV and it came in handy that day for her.  She left her crutch and climbed up onto the ATV for easy mounting.  After our ride, I stood next to the ATV so she could gently climb down without exacerbating the ankle.

The next day she rode VaiVia but she didn’t go down the road with him.

On Friday she went trail riding with her friend.

Since mom hurt herself she’s been “trail riding” a couple times each week.  I have to say I love the attention but I’m a little worried about her. 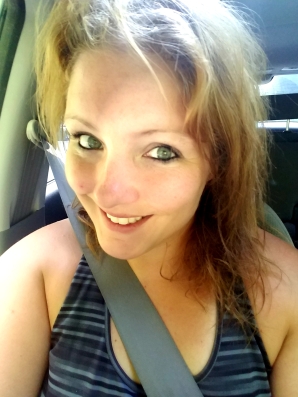 She also tried to put the English saddle on me.  She didn’t tie me and I wasn’t so sure about her decision to ride English.  She didn’t take the hint the first two times I walked away so finally I stood still and let her tack me up at liberty.  I decided not to play any games with her and I have to admit I took really great care of her.  She couldn’t drop her weight into her heels and it made her leg swing around a bit but I did a great job of letting it slide.  We got to trail ride a bit after the work and I had a really nice time with that.

She finally admits that she should have seen a doctor but still refuses to go saying “it’s too late they won’t do anything for me anyway.”  She then carries on about the terrible state of healthcare in our country and how visiting the doctor costs her $200 minimum.  Isn’t that what she pays the vet for me?  I just let her ramble while I drown it out.

She has gone nearly four weeks and she still needs ibuprofen and an Ace bandage to walk normally.  It’s always the worst when she wakes up or walks after a long period of rest.

Last weekend is a good example of how determined my gimpy mom is to get through the pain and carry on.

On Wednesday mom and I went for a nice easy ride.

Thursday she took VaiVia out for groundwork and “desensitizing.”  I’m in awe of his easygoing attitude on the ground; nothing scares him.  He allowed her to do anything and he stayed calm and ate grass.  His mantra is “Stay Calm and Graze On.”  He might be nervous with a rider but he is very wise on the ground.

Mom also visited with a good friend that she hasn’t seen in a while.  Together they traveled back to the farm where she began mounted archery.  The farm, Long Shadows Charitable Foundation, was hosting the first-ever Junior Jockey Camp led by Hall of Fame jockey Julie Krone.  Eight girls age 18 or under were selected for the weeklong away from home camp.  The days were well-structured pairing classroom discussions and videos, with activities and, of course, riding. The camp taught horsemanship along with what it takes to become a jockey.

All of us thoroughbreds know about Julie, one of the greatest jockeys and a female jockey at that.  In case you don’t know her Julie won 3705 races in her career and was the only female to win a Triple Crown race (Belmont Stakes).  She’s received tons of awards and accolades and has been inducted into the Cowgirl Hall of Fame, Women’s Hall of Fame, and was the first woman inducted into the Thoroughbred Racing Hall of Fame. Mom loved getting a chance to see the camp and meet Julie.  Mom also got on the Equicizer to practice but the pain in her ankle didn’t let her get quite low enough.

She also had the pleasure of meeting a movie star!  If you’re a Walking Dead fan (NOT ME TOO SCARY) Morgan rode a horse named Nikoli.  Mom stopped over to meet him and his mini-me Razor.  Love and pets given all around. 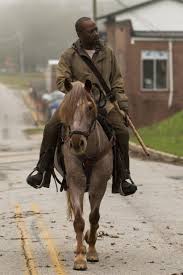 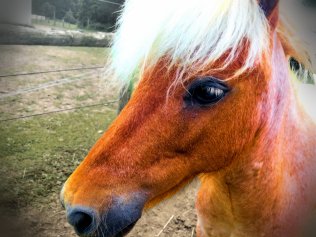 Friday morning mom woke up early to trail ride with a friend, came home and took VaiVia out for some work under saddle.  She put out some trot poles to help him find balance and rhythm at the trot.  He wasn’t so receptive to the injury.  He did well but he still has a lot of mental blocks to overcome.  Mom spent a lot of time trying to show him how to relax.  She rode quietly and kept her hands soft which really helped.  I think he’s really good for her and pushes her to be the best and quietest rider she can be.  It reminds me a little bit of how her and I first began…

I remember one day I took her galloping around the arena for 10 minutes.  I remember not settling down and always being nervous.  I spooked at anything and everything.  I hated leg pressure and didn’t care for the bit either.

I wonder if he’ll come around and see that it really isn’t all that bad.

Once she was finished riding mom took Bardi to her friend’s so she could bring him to the lake.  His new friend, Star, showed him how to swim.  Bardi watched Star and with mom holding him began to learn.  He still doesn’t love it but he never stays out of the creek at home.

Mom left Bardi with Star and her siblings while mom and friend went to Cowgirl Up Ranch for a cattle drive night.  Mom chickened out and decided not to ride so she became designated the photographer of the night.  She used a different camera though and had a hard time getting used to it. 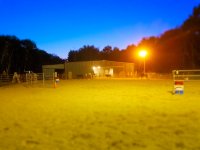 As if that weren’t enough mom got up early with Zac and they went to a place called Great Escape (Six Flags) for her workplace’s 10 Year Anniversary Celebration.  Mom and Zac both work for a semiconductor company called GlobalFoundries which manufactures integrated circuits (computer chips).  The company was celebrating 10 years and gave us heavily discounted tickets to the park complete with free lunch.  Mom loved the rollercoasters and they got there early enough to avoid all of the lines.  For most rides she didn’t even have to get off the ride to go again.  By noon theme-park goers flooded the park but mom and Zac were ready to go.  They stopped for Ice Cream at the famous Martha’s (across the street from Great Escape).

After the Great Escape mom and Zac attended a pig roast/housewarming hosted by one of their friends; I know this friend personally because I gave him a ride last year.  The house just so happens to be located in front of a farm mom almost brought me to!  Small world! They had a great time and came home late. 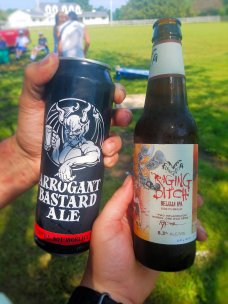 Mom works hard and it’s refreshing to see her enjoy herself a little more these days….but she needs to remember that she is injured!  Can someone please remind her that she’s still broken?  She just doesn’t stop! 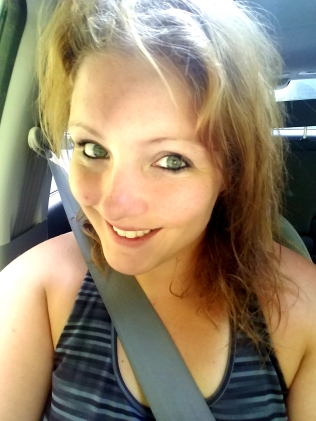