Memorial Day in the United States takes place on the last Monday in May to honor and remember the fallen soldiers of our armed forces.  While we honor our fallen we must also remember that humans were not the only ones who served during wartime.

Today’s society uses horses in entertainment, sport, and pleasure.  Horses have become pets, therapy animals, athletes in many sports, working ranch horses, and even common attractions for the city-slicker looking to take a weekend horseback ride.  Horses are given stalls and abundant turnout (mostly).  Some horses have better nutrition than most humans.  There are acupuncturists, massage therapists, chiropractors, farriers, vets, and dentists that all work on horses.  There are grooms, trainers, riding instructors, breeders, dealers, and trail guides who all count on horses for their income.

On a general spectrum, horses have much easier lives now than in the past.

Yes, we still see many welfare cases and we still lose nearly 100,000 horses to slaughter annually.  Yes, we still fight for the rights of mustangs to live and roam our lands.  Yes, we still see many deaths at race tracks.  Yes, many horses have challenging athletic careers.  Looking back on our history, however, times are still trending in the horse’s favor.  More public awareness encourages improvements in animal welfare.  Modern technology means horses are no longer needed for transportation or for heavy farming.

One thing we don’t see much of anymore is warhorses.  Today’s equestrian sports are derived from ancient war tactics.

Dressage?  That lovely “dancing” between horse and rider?

Those moves were once used in battle.

Extension and collection demonstrate a horse’s versatility in getting to the position needed.

The Lipizzaner horses demonstrate the kicks and rears that were used to combat enemies in battle.

Trick riding was developed to out-maneuver enemies in combat.  Drill teams demonstrate a Calvary’s ability to stay in formation.

Even mounting from the left side of the horse stems from warfare….a soldier’s large sword was often at the soldier’s left hip to allow him to unsheathe it with his right hand.  To avoid sitting on the sword he would mount from the left.

Horses that served in wartime were used for transportation, Calvary, recon, artillery, medical, and communication.  They were often targets for enemy forces since the troops relied on their equines so heavily.

George Washington is often depicted riding a grey horse named Blueskin, but his favorite horse was named Nelson.  Washington’s friend Tomas Nelson gifted the horse to him, hence the namesake.  Nelson was a 16 hand chestnut with chrome that carried him into battle and kept a level head amidst cannon and gunfire.  Following the war Washington retired Nelson to his estate in Mount Vernon where he lived in peace until he passed at 27 years.

Cincinatti was a large 17 hand thoroughbred that was given to Ulysses S. Grant.  Sired by Lexington (who was considered the best racehorse at the time) Cincinnati was well bred and well cared for.  He is often the horse seen mounted on statues depicted of Grant.  The pair fought in battle together and Cincinnati was allowed to live out the rest of his days in peace.

This grey horse served for the Union Army’s artillery during the Civil War.  From 1861-1863 he saw eighteen battles with Maj. Gen. George McClellan’s army.  Outliving his owner Normal Hall he was retired to Hillsdale County Soldiers and Sailors Reunion Association in Michigan. 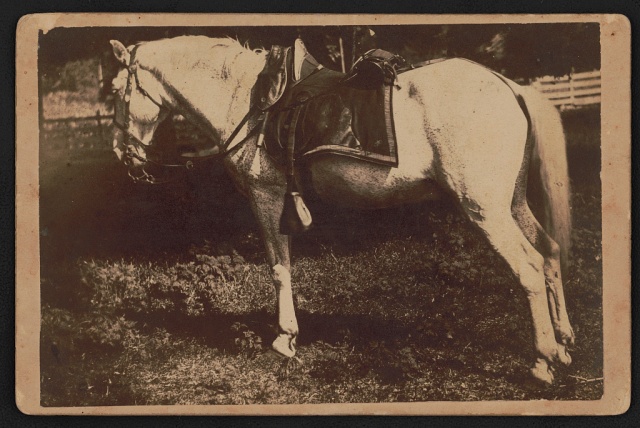 Horses that were used for war in America were not always the impressive steeds you learn about in European history.  They weren’t all large big bodied Andalusians.  The biggest source of horses back then was the west where thousands of wild mustangs roamed.  Comanche was one of these mustangs, a simple bay gelding purchased for a mere $90.

The Battle of Little Big Horn, also called Custer’s Last Stand (after Lieutenant Colonel George Custer who led the charge), was a historical conflict during the Great Sioux War of 1876.  The Lakota, North Cheyenne, and Arapaho tribes defended their homes as the United States moved in to claim more and more territory.  The Native Americans annihilated the United States during this battle.  In fact, Comanche was the only living thing returned to the U.S. Cavalry.  Over 200 soldiers were killed and most horses had been taken.  Comanche was left behind due to several injuries that included three arrows to the hindquarters, neck, and shoulder as well as four flesh wounds.

Comanche was returned home and nursed back to health and used as a symbol to the American people.  He’s often called the “sole survivor” of Little Bighorn.  He finally passed from colic at an old age of 29.  Comanche was taxidermied and to this day you can still visit him at the University of Kansas Natural History Museum.

Blackjack was never used in battle, but he was honored with the title of being the last Quartermaster-issued horses of the U.S. Army.  He was a 15.1 hand jet black morgan/ Quarter Horse with an attitude.  Instead of war, he was used in the Caisson Platoon as the riderless horse at funerals.  The riderless horse traces its roots back to the Mongols and Ghengis Khan who believed a sacrificed horse will serve it’s fallen soldier into the next life.  It leads me to think this is the idea behind George R.R. Martin’s Dothraki traditions from Game of Thrones.  Instead of sacrifice, these days the horse is fully tacked with a pair or boots positioned backward in the stirrups.  The boots symbolize the soldier’s last look upon family before moving on.  Blackjack took part in over 1000 funerals including the one for John F. Kennedy.

Originally named Ah Chim Hai (Flower of the Morning) this small 13.1 hand chestnut filly was purchased in Seoul, Korea by Lieutenant Eric Pederson for $250 in 1952.  She then became a marine, hauling ammunition, particularly a dangerous recoilless rifle dubbed the “reckless” rifle;  Ah Chim Hai became known as Reckless for this reason.

Her horsonality won the hearts of the Marines she served with.  She was known to steal food and would eat anything including scrambled eggs, pancakes, and the morning coffee.  She also enjoyed a beer periodically with her fellow Marines. If she wasn’t getting enough attention she’d begin to play with anything she could find to bring the focus back to her.

She was an incredibly determined horse with a strong work ethic.  Her most famous efforts came during the Battle of Outpost Vegas in 1953.  In only one day Reckless made 51 mostly solo trips carrying heavy ammunition to resupply firing sites, climbing steep mountainous terrain.  On her return to base, she carried wounded soldiers back.  Once she finished a run she’d turn around and bring more.  Enemy fire averaged 500 rounds per minute but she made her trips to help her team.  Though she took care of her team she was also well loved and the marines often took better care of her then they did themselves. 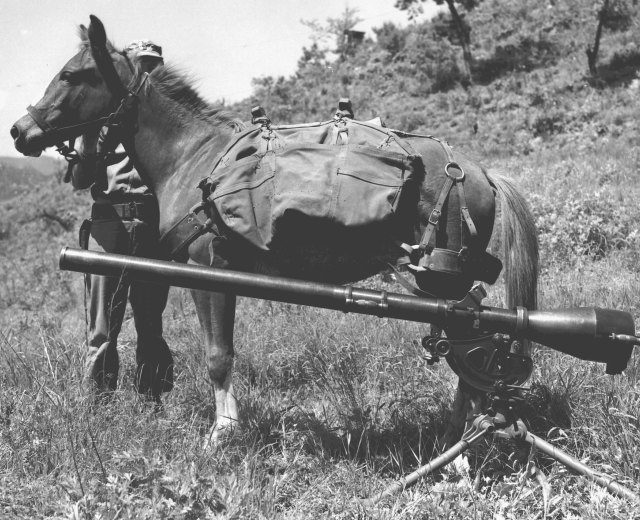 Humans have built society on the backs of horses.  Horses were worked hard and a lot was expected of them.  Horsemanship didn’t exist on the level we know it today.  Many horses, especially in the Civil War, were very poorly cared for.  Many suffered illness, neglect, malnutrition, poor hooves, dehydration, exhaustion, and skin conditions due to not getting brushed.  Horses during this time were quite literally “used and abused” yet we owe horses so much for what they have done for us and for society.

This Memorial Day in addition to our fallen soldiers I hope you’ll consider these warhorses as well as the millions of nameless others that faithfully served our country. 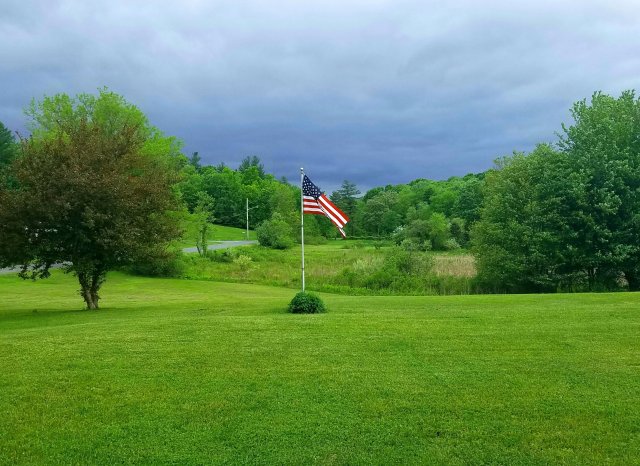 For my International friends, I’d love to learn about your country’s equine military history.  Post in the comments, let me hear from you!