Winter in the northeast is rough.  It’s something that’s been lingering in the back of my mind since I began setting paddocks up in spring.  With no running water and no electricity I’ve been thinking up ways to keep the horses’ water from freezing when the temps drop.

Until now I haven’t acted on any of my ideas.  I don’t have a truck to running out to buy supplies requires advanced planning and a group effort.  Around Thanksgiving this year we began to get snow and frigid temperatures.  I pulled out the rugs and threw them on the amigos who were more than happy to get some extra warmth. I wasn’t prepared for these temperatures so early so the water trough froze over.  I went out 2-3 times per day to sledgehammer the ice.  In a feeble attempt to prevent the surface from fully freezing I threw in the Jolly Ball.  It should float and “bobble” enough to prevent freezing.  WRONG.  In a cold spell going to single digits one week the tank froze over and the surface was thick (even when I broke it up).

We got a break last week and the 30-40 degree weather returned.  I took this opportunity to make one desperate attempt to rig the water trough.

I decided to place the trough under the roof of the shed.  The rain drips down into the trough from the roof so it helps me fill.  The downside is I cannot always monitor how much they are drinking; but the upside is that I haven’t needed to fill the tank in a month with all the rain we’ve been getting.

Having no truck makes things a bit difficult.  I had a grand idea for designing a nice plywood box with a plexiglass front, with insulation inside to keep it all warm(er).  The plexiglass would serve like a greenhouse allowing the warmth of the sun in.  I also wanted to add a top on the trough with a hole just large enough for the horses to dip in and drink.

Instead of this idea (maybe next year?) I opted to go a bit more…..rudimentary.

We will be needing to replace the insulation in our attic soon so I began the project by purchasing one bag of R-30 attic insulation. 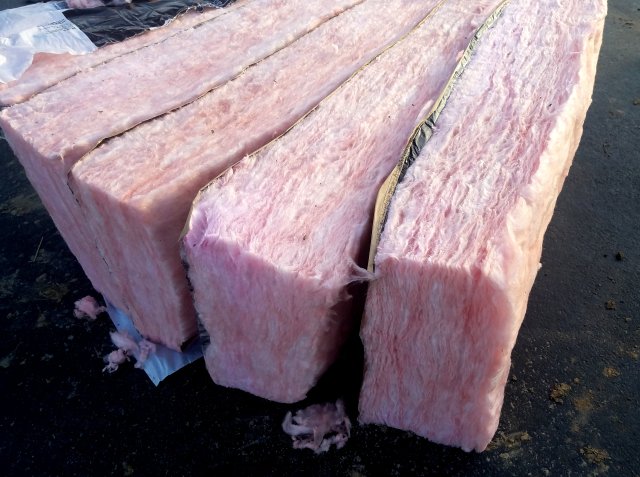 When we came home I cut one batt in half and bagged 1.5 batts in black contractor bags.  Using some black Gorilla Tape I sealed up the bags.

I made three bagged “pillows” and took it to the trough and taped them around the outsides (The perimeter of the tank is approximately 12 feet and each batt is 48″).

I also purchased some rigid foam boards.  They don’t fit perfectly in the trough but dealing with the smaller size was a better solution than the massive sheets Lowes sells.  The small boards are only about an inch thick so I taped 4 together.  This will simply float on top of the water to retain SOME warmth along the surface area of the water. 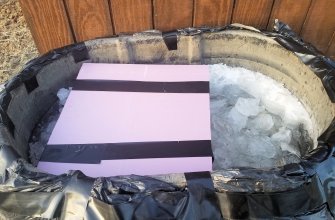 Since making this rough attempt at insulation we have had a couple of weeks of good cold weather.  Some nights it gets down to low teens.  So far the worst I have dealt with is a 1/8″ layer of ice along the top of the water, easy enough to break.  I have also been adding about 5-8 gallons of hot water from the house twice a day because we’ve had two weeks of dry weather (finally).  Five gallons doesn’t do much to warm the trough of 100 gallons but between this and the insulation dealing with the icy water has been significantly easier.  I have high hopes for this getting me through the winter, it isn’t perfect but fingers crossed.