On May 2nd the horses came home to my backyard.  I had prepared the backyard for them just in the knick of time.  Hopefully you’ve been following the journey, if not we’ll catch you up.

The last couple of weeks I have been incredibly busy and I have lots of updates about the farm.  I have not been nearly as busy on the blog as usual, just the weekly Thursday post.  So this week I’m going to break up one long massive update-packed post with a few dailies. By “a few” I mean a week’s worth so bear with me.

The horses are fantastic.  They’ve really settled in are we’re all still getting familiar with the routine.  Of course it doesn’t help that the routine is still changing as I continue to make improvements.

Without going into the overly long post that I’m avoiding, I’m changing the feed rotation and adding some more legroom.  For more details you’ll have to sit tight until updates 2 and 3.

I told you…a LOT has been going on.

Unfortunately the bugs are really bad lately.  We have a pond at the top of the will, marshland to the right and wetlands to the right.  There is a lot of water around so I had assumed bugs would be an issue.  Despite having the horses on a feed through bug control plus fly spray they are still covered mid afternoon.  I am thinking of some solutions, maybe a new concoction/fly spray is needed.  I have several ideas brewing, but I’d love to hear your stories, what are some things you have used?

I’ve been doing my best to keep these two active while also getting the rest of the chores done.  Typically when I work one I simultaneously work the other so they get active at least 2-3 times per week.  I was surprised to see them become buddy sour as they were fine on the farm, but I suppose that’s the result having the two on their own.  After a couple of rides on Happy, Blade had begun to relax.  He still runs a bit and whinnies but usually settles down and starts to graze.

Happy is a bit more expressive than I anticipated.

My first paddock has 4 strands of electric with two charged strands on the top and second up.  They extend across the gate with a yellow rubber gate handle and I also have a green metal gate. The first time I took Blade I left the electric off and just closed the metal gate.  Happy began to push and lean on the gate as if to break it down.  I had to pause my work with Blade in order to hook the electric back on.  Happy is beginning settle more while I work Blade, but I still hook up the electric to be sure.

I’ve been really lucky to have my trainer visit with her daughter periodically.  together we both take the horses on nice trail rides along the property.

The horses are both moving so well.  Both have some arthritis issues and having access to roam 24/7 has been wonderful on their bodies.  Happy doesn’t feel nearly as stiff as she used to when warming up.  Most days she’s a lot softer on the bit, I usually have to hold her back quite a bit.  She still loves to run so I do have to hold her back but she’s eager to give a beautiful headset and move out.

Blade has been looking and feeling great.  I only walk and trot him because he’s still not right at the canter.  Unlike Happy he’s feather-light on the bit.  Lately he has some mini-tantrums during our ride.  We start off great, but as I ask him to use himself more he resists and has a momentary “brat” moment.  He won’t go straight forward, he wont go consistent, and he half passes around.  Once he works it out of his system he’s back to being the worker he was at the beginning of the ride. 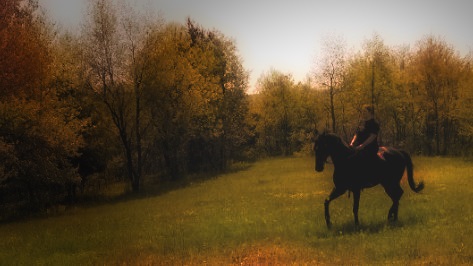 We also had our first farrier appointment since the move.  I have been dreading this part the most, as I have only allowed one person work on Blade’s feet in the last 3 years.  Since I moved I’m a bit too far for her so I had to find somebody new.  My neighbor recommended hers, who hasn’t needed to find new clients in 20 years.  I spoke with him on the phone and it seemed to be a good fit.  Upon meeting the new farrier I found him to be very knowledgeable, great with the horses, and we had a lot in common.  I’m relieved it worked out…just one less ulcer eating away at me.

Coming up tomorrow: More updates on the horses and the feed changes.

Missed some of the story?