The year 2019 came in like a butterfly and STUNG like a bee at the end.  I had a very rough end of the year that I won’t get into this week.  Instead, I wanted to tell you about the silver lining to all of it.

Just before the worst week of my life was about to begin I had the pleasure of attending Zac’s buddy’s album release party. During the celebration, Zac (the best beat-boxer in all the land) performed one of the songs with his friend.  The day we came home I had the joy of seeing a wonderful new girlfriend of mine.  We celebrated her birthday by enjoying a paint and sip event…my very first.

I didn’t sip any alcohol but I enjoyed hot cocoa and a bottle of kombucha.

The event took place at our local tack store; we were invited to choose a template or to send a photo to our instructor ahead of time.  All of the money raised for the evening’s festivities benefited a local group called Saratoga Code Blue.  The group helps to provide shelter for the homeless of Saratoga, NY.  With winter around the corner, they needed to have the funding so they could provide safe, warm shelter.

I had NO CLUE what I was doing, but the instructor vaguely went over the basics.  It was crowded and very difficult to move….and everyone was painting something different.  Needless to say, getting any 1:1 attention was impossible so I managed to figure it out on my own.

A photo I took a few years ago while petsitting my friend’s horses.  Reality, a gorgeous chestnut OTTB mare posed quite perfectly at dawn while waiting for her breakfast.  She turned toward the sound of distant equine neighbors who also seemed to be awaiting their morning meals.

We were having a blast.

I painted the background first.  I was told I was a bit heavy on the paint and it took a while to dry.  Once it dried enough I began to work on the black silhouette.

We all chatted with our neighbors.  Talked about our animals. Our jobs. About Code Blue.

We joked with one another.

We also were given raffle tickets to enter into our choice of 5 prizes.  Unfortunately, my ticket was not drawn for any of these.

After the event, our paintings were photographed.  They appeared on Cheshire Horse’s Facebook page the next morning with a “Viewer’s Choice” competition.  Whoever’s painting received the most “Likes” won the big prize worth $200. 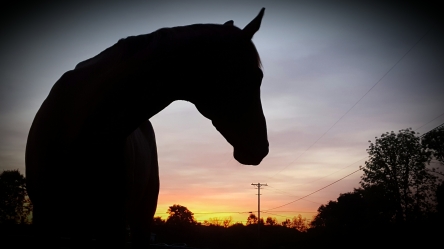 During that particular week, I was hurting quite a lot.  I went home that evening to cook dinner; within 90 minutes Zac and I were both horrendously ill.  Food poisoning.

My friends and family rallied behind me.  They were there for me through the worst time of my life.

By the end of the week, my painting had received over 60 votes…enough to put me in first place to win the viewer’s choice prize. 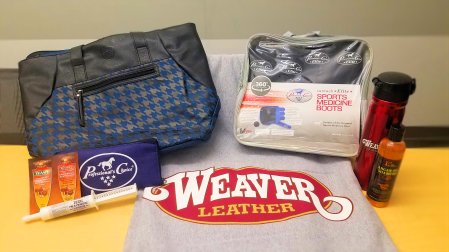 Inside the gorgeous blue bag was a set of 4 Professional’s Choice sports medicine boots, a thermos, Argan oil shampoo, a Weaver Leather blanket, a reusable shopping bag, a tube of pre & probiotic, and a sample pack with leather cleaner/conditioner.

Obviously, this does not take away from the trouble I’ve encountered last month but it was a silver lining.  It was something to smile about.

Most importantly the friends and family who stood by me are the true blessings.  I will forever be grateful for them all.