As a postal worker I delivered to a family that began their journey as chicken owners.  They frequently purchased items online so I delivered their packages to their porch.  One day in early spring I delivered a package and found some cute little peeps hanging out in a brooder.  I watched them grow up over the next few months and the owners built a very nice coop and run for the chickens.  Whenever I showed up the chickens came running to see me.  It was the first time I saw chickens as having their own personalty.  They seemed fun and very friendly.

It was that family that gave me the dream to try it out myself;  I love eggs, and I love animals.  Last year we were wrapped up in paddock creation and chomping at the bit to meet our deadline to get Blade home.  That was our first priority.

This year I still have goals for the horses but I no longer need to worry so much about them since I have 3 paddocks and my shelter.

The year I get to try something new…raise some chickens!

Meet the girls!  I call them “Lil’ Chicky Mamas.”

Zac and I have been back and forth for quite a while trying to learn about chickens and how to raise them; since this is new territory for us we are nervous to make a mistake.  We attended a webinar last spring hosted by Standlee’, the company I love and use for much of the amigo’s feed (beet pulp and alfalfa).  They invited The Chicken Chick to present in this webinar called WHAT DO I NEED TO KNOW ABOUT RAISING CHICKS?.  You can also visit The Chicken Chick for more information if you’re interested.  This webinar was a fantastic start and really inspired us to give this thing a real shot.

Last week we got all the materials and made a plan.   It is still far too cold outside for chicks but we are fortunate enough to have a 4-season room at home.  The room allows us to keep the chicks warm and safe from the cats.  It has excellent access to the sun and has heater vents.  We also brought in a space heater to make sure they were warm enough.

To set up a brooder we duct taped cardboard boxes around the area we wanted to use on the porch.  We had a tarp laying around so we “lined” the area with the tarp, allowing a few inches to rise along the sides so it creates more containment for the litter.  We purchased pine shavings to use for litter.  Instead of using a heat lamp (250 watts!) we opted for the safer more energy efficient option of a 25 watt brooder plate.  The peeps can nestle under the plate for warmth like they would with their mother hens.  The plate is adjustable in height so we can raise it as they grow. 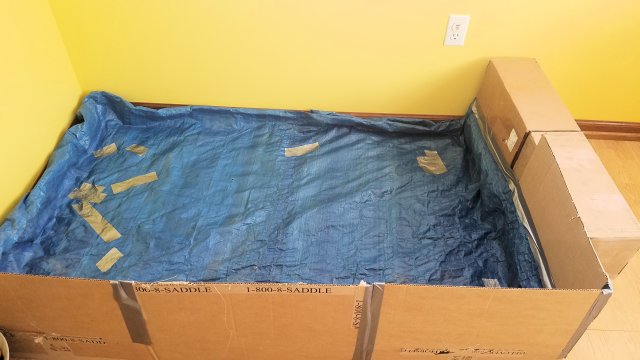 From the webinar we learned about feeding the chicks.  We started off with a normal drinker but we also purchased nipples so we can train them to use a more easy-to-clean method of hydration (more to come on that later).  We also learned to find out whether or not the chicks had been vaccinated for coccidiosis.  If they had, then we would need to be sure to feed UN-medicated feed as medicated feed will destroy the vaccine.

Last Saturday, we pulled the trigger and bought some babies!  The law in New York requires a minimum purchase of six chicks as an attempt to prevent “Easter basket” chicks.  Chickens are social critters so having a few is only right, anyway.  We purchased 3 Columbian Rock crosses (yellow), and 3 Partridge Rocks (brown).   I am still learning more about them but these breeds are considered dual purpose birds, high producers of eggs, and cold tolerant.  They are also considered to be friendly and docile.  Sounds perfect!

We purchased the birds at Tractor Supply and learned that they were NOT vaccinated.  We decided to purchase a bag of medicated feed, which contains Amprolium to kill coccidia that could make them ill. Not everybody does this but we wanted to be extra sure they were healthy.

When we got the chicks home we noticed 5 of 6 had what we learned was “pasty butt,” which can be life threatening if not taken care of.  It happens under stress, which is understandable since they most likely had recently arrived to TSC by mail.  The temperatures and stress of travel could easily have caused this.  We carefully removed the hardened feces that was plugging up their bums (vents).  I used a Q-tip and warm water to coax it off piece by piece so it didn’t rip out any down.

By the next day all the chicks were happy and seemed very healthy.  They were moving around their brooder, napping, exploring, and eating a lot.  In only four days I’ve already noticed a big difference in their size.

I visit them at least twice a day and offer them food by hand.  I begin to talk to them so their are familiar with my voice.  As of Wednesday evening (four days later) they are beginning to recognize me as I enter the room.  Two of the six have been named; Rihanna is a Columbian Rock cross with a black dot on her head.  She was named because she’s a rude girl (as a play from the song “RudeBoy”).  One of the Partridge Rock girls is more eager to greet me than the others so I have named her Merida after the main character in “Brave.” The other four still need to be named (if you have a good one for a loudmouth let me know).  As I hand feed them they are very happy standing on my palm to eat.

They are also very curious lil’ chicky mamas.  I added a few branches from the yard to their brooder and they are already practicing on them.  I experimented with my phone and put my camera in the brooder with the “selfie” camera on.  They had a blast looking at themselves and pecking the screen (thank goodness for screen protectors).

We will have them on the porch for several weeks as they grow up and get their feathers.  In the meantime Zac and I will be busy planning out how to build their coop and run.  Last night we got together and discussed the plans to make sure we are on the same page.

The plan is to build an economical coop with a decent pen but to also allow them free range benefits as much as possible.  Chickens love to explore and I have heard wonderful things about their handiness in composting horse manure.  Free ranging may be tricky since we have a lot of predators around but Bardi is a fantastic protector as he used to care for his former owners’ flock.  We showed him the chicks Saturday when they came home. He looked at them and laid quietly next to us as if to say “I know the routine already.”  When we brought him outside I noticed he had stepped up his bird chasing game tenfold…I didn’t think that was possible but it was!  He knows his job and is very serious about it.

Although chickens are entirely different than horses I chose to add them to my story on the blog.  There is a lot to be learned about keeping chickens with horses so be sure to come back often to learn more about all of it in future installations.

As always I post every Thursday morning at 6:30AM Eastern time.  The first Thursday of every month Blade speaks out in The Blade Chronicles.  Please also join me on my Facebook page  so you can catch other fun posts.  On the Facebook page I share a cool video every Monday and I am beginning to share other quick fun updates on Fridays.

Have you had chickens?  Do you have any tips?