This year I was only able to make it to 3 clinics.  I was only at Equine Affaire for one day and had a mission to see these three trainers, all of the booths, some breed demos, and still make it to Fantasia.  It was a full day but worthwhile.

In yesterday’s post The Green Horseman at the Affaire I took you through my day, gave you pictures and video of different breeds, and highlighted a few products I liked.  Today I want to dive in a bit more to the trainers I watched.

Equine Affaire is known for bringing together a large number of trainers and equine professionals.  People from all disciplines gather to share their knowledge.  There are western practitioners, dressage, liberty, show jumping, driving, trick riding, veterinary, and many more.

I couldn’t attend Equine Affaire Saturday or Sunday because of my work schedule and of Thursday/Friday I chose to attend Friday.  I diligently prepped hay bales the night before  for the amigos and got up early so I could arrive on time to see Warwick Schiller.

Warwick Schiller is a very well known trainer and was scheduled to present at 9:30am.  Sadly I haven’t yet read up on his methods but I have heard many sing his praises.

I was not disappointed. 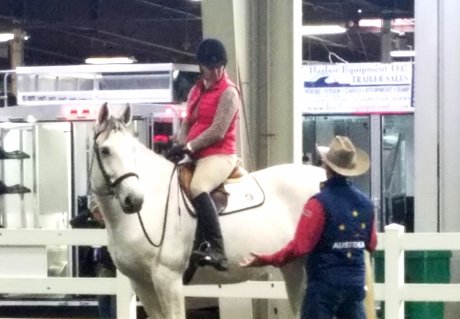 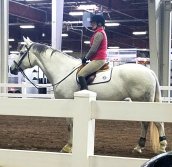 The horse riding with Warwick was a Belgian Warmblood/Percheron/Thoroughbred cross.  She was a lovely mare with a very easy demeanor; her gaits were very smooth and free flowing.  She was wonderful and had a very good rider as well.

Much of the clinic was Warwick just talking and telling stories.  He had the rider walk the horse on the buckle (completely loose rein) and allow her to explore the ring.  The reason here was to allow her to find her “comfort zone” where she “didn’t have to work.”  She ended up by the gate, as most horses prefer, with the idea that the gate leads back home.  The work ethic wasn’t exactly an issue with her, however, and she soon navigated her way across the ring.

The main complaint the rider was having was this mare tended to drop her shoulder when transitioning to the canter.

Warwick had her canter to the left a few times so we could witness this shoulder dropping.  He suspected that the mare was anticipating the turn.  To fix this he had the rider turn the mare to the right (into the fence).  When the shoulder dropped the rider turned to the fence.  The first few tries it took the mare a while to respond as she was completely unprepared for the opposite turn.  Once she figured it out she began to carry herself more centered and was prepared for the turn.

Warwick had also pointed out the rider’s head carriage.  The rider often looked down and to the left when cantering.  The difference I saw when she kept her head tall and gazed ahead was astounding.  We always hear our trainers tell us “head up” and “look where you want to go.”  These clinics are great for seeing it in action.  Though we aren’t riding ourselves we can see what a difference something as small as this makes in equitation.

You can see more Warwick Schiller at https://www.warwickschiller.com/

After Warwick Schiller’s clinic was finished I raced across the grounds to the Colosseum to see the one and only Clinton Anderson.  On my way over I had a complete fan-girl moment.  His trailer was parked out front.

I stood ringside to watch the clinic.  Clinton Anderson (Down Under Horsemanship) was recommended to me by my trainer.  After purchasing the fundamentals video series, the halter, and the handy stick I began to use the method on Blade. 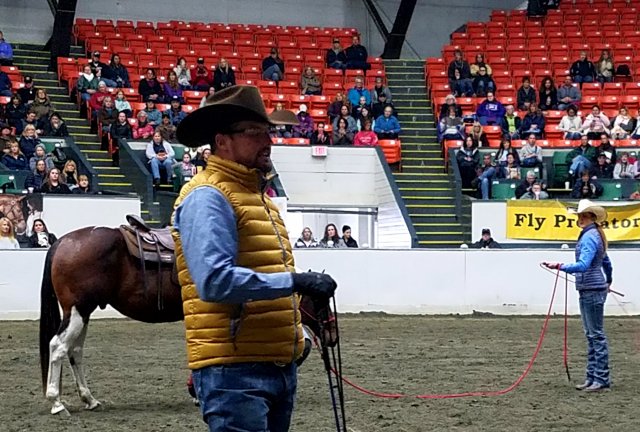 Clinton Anderson’s method saved Blade from being a “Return to Sender.”  He was extremely reactive. When I began doing lessons on him I was sharing the ring with another few people who were jumping.  One of the other horses knocked it’s hoof on a jump pole, but not hard enough to knock the jump down.  Just this noise send Blade into a spin and he ran the other way leaving me in the dirt.  He became so reactive I looked for excuses not to ride.  I began to fear getting on because I knew I’d come off; sometimes twice in one ride.

After teaching Blade the groundwork he because less reactive and overall happier.  He was easier to ride and more willing.  He respected me more. 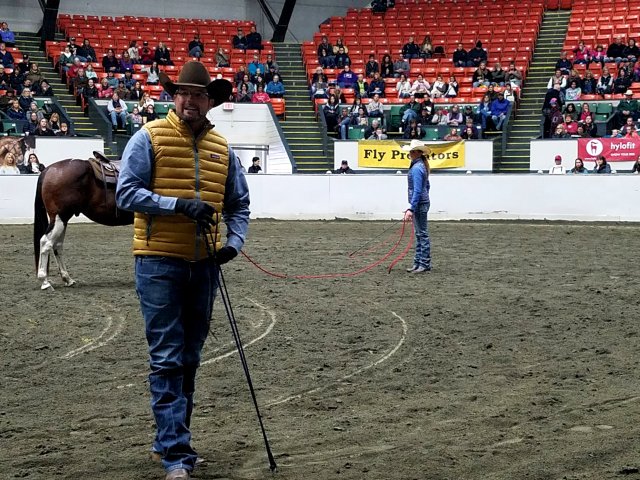 During the clinic I watched they had picked up from the day before.  They were working with an eleven year old paint gelding who was reactive and spooky.  The day before they taught him a lot of the groundwork I did with Blade.  Moving “forward, backward, left and right” and alternating between sensitizing and desensitizing.  Though I hadn’t seen the day prior I could tell he seemed to be learning.  He was licking and chewing and showed a lot of respect. 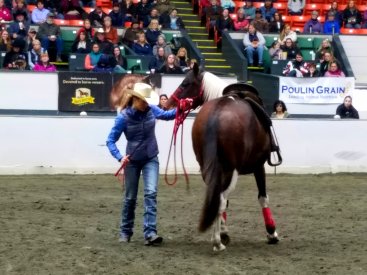 After reinforcing the groundwork the rider got on the horse.  I haven’t gotten this far with Blade because I 1. Haven’t watched it yet and 2. Blade’s body couldn’t hold up to riding at the time.

The first exercise Clinton had the rider do was rollbacks.  This worked on collection and getting the horse to engage its hindquarters and it helped with circles.  The rider loped the horse in a circle at the gate (like Warwick Schiller, the concept is to work the horse where it wants to be).  Every so often she turned the horse into the wall to turn around and lope the other direction.  Sounds sort of familiar, right?

After working on the circles by the gate she worked the horse around the arena wall.  Some turns were better than others but it seemed he was understanding the concept.  One thing is for sure he was not used to that much work.  They brought him down to catch his breath and he was puffing hard. 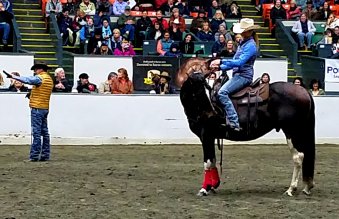 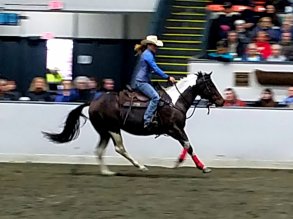 One of Clinton’s assistants walked out traffic cones for the second exercise and lined them up down both sides of the arena.  The rider loped to a cone, trotted a couple circles around it, and loped off to another cone.  The idea here was for the rider to focus on getting to one spot.  Once there trot around that spot a couple of times.  There was no order but the rider had to focus on the spot once she selected it.

Clinton told us this can be done while out on the trail around trees as well.  I look forward to trying it when my home isn’t so wet.

I hope you enjoy some of the video and you can find Clinton Anderson’s site at https://downunderhorsemanship.com/

Finally, the third clinic I attended was for a trainer named Mark Rashid.  I’m disappointed in myself as I have no photos to show for it.

Mark had four riders in the arena all with different abilities and issues.  The theme of the clinic was developing smooth transitions.

Mark took turns working with each person individually at one end of the arena while his assistant worked with the others.

One of the most important things I took with me from this clinic was his attention to the HORSE.  He paid attention to the whole horse.  There was a Shetland pony, very willing and very sweet.  He had difficulty slowing from a canter and Mark was able to recognize that the pony had a sore back.  Though we can’t reasonably diagnose anything he went on to say it could possibly be saddle fit or dental.  Mark instantly earned all the horsemanship points with me because he considered the horse and the various possibilities where issues could arise.

and stay tuned for tomorrow’s post with lots of pictures and video from Equine Affaire’s famous Fantasia show.