Another work week down and I can finally sit down to focus on my next update.

Last week I gave an update on the status of our french drains.  We still haven’t done much with those yet (this week pending weather and illness).  The stone is here and the PVC is waiting to be put together.  In the meantime I’ve been working on the fencing project.  I can’t have horses without a fence!

Those of you who know me personally know how much work I’ve been doing around the yard.

We bought our home in December last year.  Until this month we’ve had snow on the property.  Our goal is to have the backyard ready to bring Blade home in May.  As I write this on Wednesday April 11th I have exactly  3 weeks (shooting for Wednesday morning May 2nd).

You can follow the progress by visiting previous posts.  The top link is oldest. 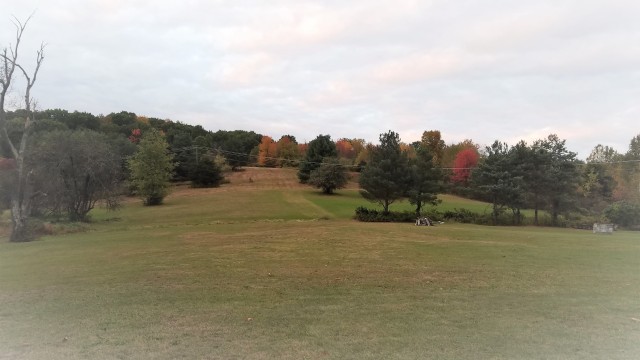 One of the major components of bringing Blade home requires that I have fencing.  I can’t have a horse here if I have nowhere to put him!

Zac and I have been out to the back to walk the property and plan out fencing on multiple occasions.  See the land beyond that first row of pines? That’s where Blade is going to live next month.

At first the plan was to buy 2 round pens and have Blade live there until fencing was put up.  Plans have changed and evolved.  The next evolution I decided to put fencing up right away and have two paddocks, nearly square, with no access to the woods.  My trainer has since convinced me to make use of the woods.  This will add more work but in the long run will benefit everybody.  We will make use of natural resources and of the land we’d otherwise waste.  The horses get to explore the woods and have a natural shelter from the elements (I will also have the corral shelter immediately and a run-in by June).  I also will get some simple trails to ride out of it.

On our final planning walk we put sticks in the ground where we intend to place corner posts.  We bushwhacked through heavy brush and trees and found some good tree trunks that to use as fence posts.

Unfortunately we dove into the project without a though about taking “Before” photos but I found the one below on the bottom left.  It was cropped from a much larger photo so the quality is lacking but hopefully you can see what we were working with.  The large tree to the left of the trailer marks a fence post, which will run deeper into the woods.  The fence line will be coming from my location in the photo.

The photo on the right shows that same section after some work has been done.  We’ve since removed that large fallen tree that’s in the way.

Getting deeper into the woods you can begin to see the land opening up.  There is a lot of overgrowth, and young saplings have popped up everywhere.  We’ve widened the path by at least 20 feet, more in some areas. 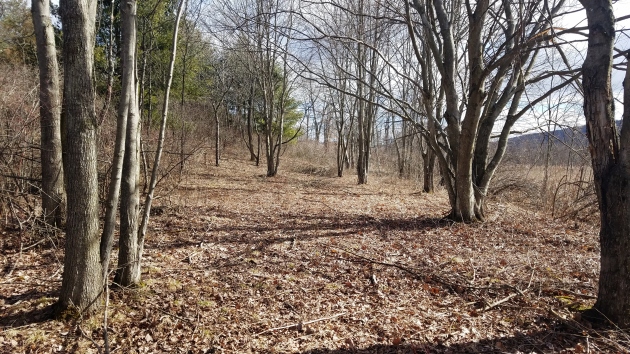 As we dug deeper into the woods we were met with heavily overgrown patches of saplings.  We tried to walk through this section…and made it, but just barely.  The twigs and branches were intertwined.  It’s a wonder how they survived and some of the older trees had already perished from the competition.  I can’t even imagine what this section looks like with leaves.  I’m relieved we are doing this now instead of a month or two from now.

Last week I decided it was time to make a dent in this area.  With only a long handled set of loppers I started chopping, getting as far down to the root as possible.  In a matter of only a few hours the whole hill had been felled.

Zac took the next day off from work (Friday) and together we went out to finish off the hill.  I dragged the debris to make large piles.  There is more wood than I can possibly burn and I don’t own a truck.  I might eventually need to phone-a-friend so we can get a wood chipper and take care of business.  For the time being all the piles are out of the way.  We’ll get to them when we get to them.

A fence-line will run up this hill right in the center.  To the left, the paddock.  To the right, trail riding.  I resisted the urge to rake.  If we get all projects finished before May I will return to that.  For now clearing and putting up fence comes first.

We finally got to the top of the hill where we see another clearing.  From here we will turn left and back out of the woods.  This is the next round of clearing, which I’m hoping to complete by this weekend. 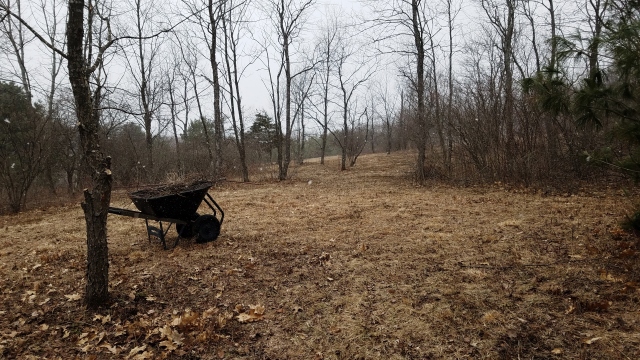 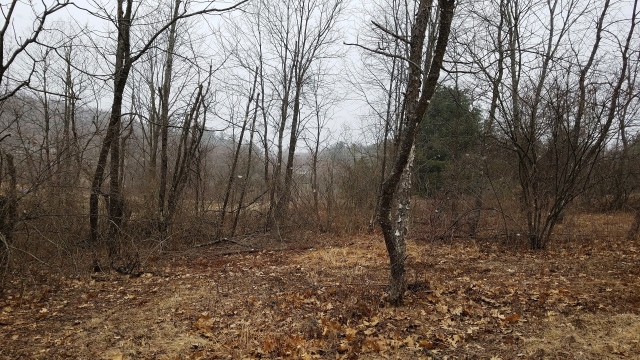 The next phase, need to cut straight through this section.

After working outside and getting to a decent stopping point we decided to have a bit of fun.  Zac took a joyride in the wheelbarrow. 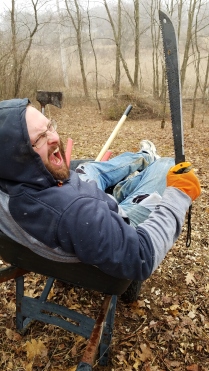 As a side to side comparison you can really get a good feel for the progress we made last week.  Let’s hope this weekend will be just as successful!  Stay tuned! 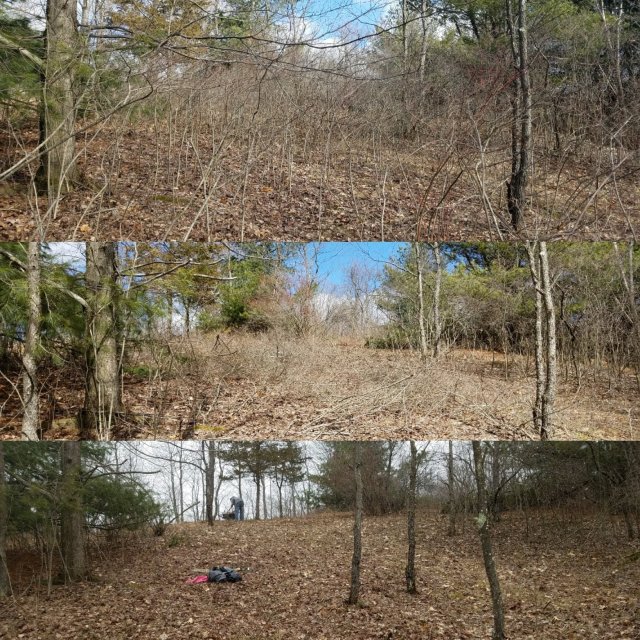