My first hunter pace this year was totally unexpected (See We Hunter Paced; But It Was Not What I Expected).  I had every intention of bringing Tiger and as horses do, he ripped a shoe out the week prior.  The shoe was reset just fine, but the quarter clip had bruised his sole before I was able to remove it completely.

I am surprised, proud, and elated by how Blade not only rose to the challenge but how he EXCELLED.  Sure, we need to work on things…ESPECIALLY water crossings.  But this was his first time away from home.  His first hunter pace….and only his 3rd or 4th time jumping.  We skipped the tall and complicated.  We skipped walls.  But he LOVED the log jumps.  I didn’t expect him to be game for every log jump but he was.  I didn’t expect him to take the photo jump, but after 2 tries he nailed it…and the photos are evidence that he was very proud of himself.

I can’t wait to share Tiger’s adventures with you today.

The week after LKTA we were rained out.

Our next hunter pace on the calendar was Locust Hill.  I have heard so many great things about this pace.  How beautiful it was.

I was not disappointed!

TIGER and I were prepared and ready early that morning.  As always I had everything ready and waiting by the end of my driveway.  The driveway is too small for a truck and trailer so we load on the roadside. 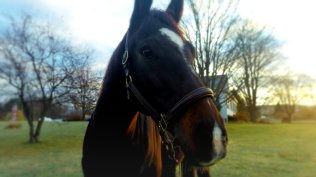 I was riding with my trainer and a friend at this pace.  My trainer brought two of her horses; a morgan mare (Aria in purple), and a quarter horse mare (Chance in light blue).  Chance was the fun mare that I rode on my very first pace.  The pace when I discovered what an amazing time hunter paces are (Autumn Colors, New Experiences, is That a Tree?). 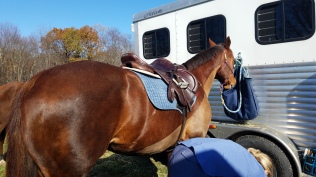 We got there, got tacked up and made our way to the start.  Tiger was feisty.  He wanted to go and wanted to kick at other horses.  I hadn’t seen him in such a state before.  When we finally got moving he was hot.  He felt like a freight train that wanted to race the horses ahead of him.  We learned quickly that letting him jump first was best.  He jumped everything with confidence and bravery and he didn’t rush anything.

By the time we made it to the photo jumps we were both on the same page with each other.  When there were height options we chose the higher jump.

Nothing phased Tiger.  He didn’t have a wrong step and he didn’t hesitate.  We came to a long and low jump I had never seen before.  He carried me over it flawlessly.  The next jump was a round-top.  At first, it seemed like an ordinary jump but as Tiger and I approached I realized how enormous it began to look.  I felt it was too late to turn away so we dug in and launched.  Tiger didn’t mind and happily overcame the 3’3″ high, 3’3″ wide round top (I’m guessing) with no difficulty.  I was another story.

As we soared over the largest obstacle I have ever jumped my form was flawed and I lost both stirrups.  We landed and I was trying hard to stay on.  Tiger was a gentleman and kept me right where I belonged.

We continued on to the rest of the course.  While trekking through the woods a large bay came tearing through with a riderless dressage saddle.  We were able to reach his reins and held him until someone came chasing after on a little grey.  The man riding took the runaway back to his rider.

This farm had a lovely water complex.  After Blade’s exuberant way of detesting water I thought I’d try walking Tiger through the side rather than galloping at the jumps.  Tiger is not Blade.  He happily walked through with no trouble.

Once we finished Tiger and I were tired.  I let him eat his alfalfa/grass hay while the three of us girls enjoyed a fabulous catered lunch in the food tent. 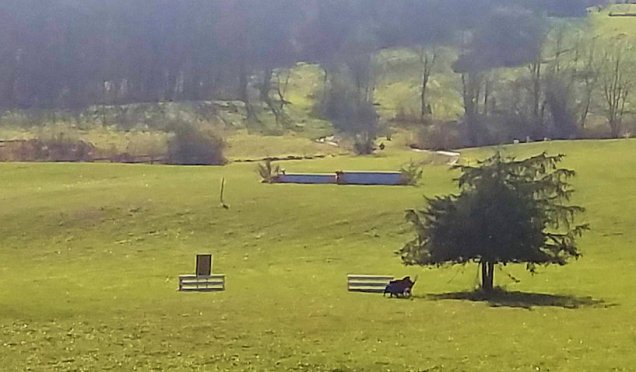 Tiger showed a new level of affection for me the next morning.  When I came outside to feed he greeted with attention and willingness.  He wanted to hang out with me and do what I was doing.  FINALLY, we are connecting on a deeper level.  Until this moment he’s been resisting me.  He’s very professional under saddle but we are still getting to know each other.  I remind myself that it has taken years to develop the intense bond Blade and I have; it’s going to take time for Tiger and I to develop that as well.  This was progress.

The next week we ventured out with a couple other friends to the Rombout Fox Hounds Hunter Pace.  It was our last for the season.

We were a trio of ladies riding our beloved thoroughbreds.

The Rombout Pace was more difficult for Tiger and me.  We didn’t communicate well and we were fighting each other for quite a lot of it.  I didn’t end up buying the photo jumps because we fought and looked terrible over both.  While he wanted to lead and to gallop I asked him to calm down and respect the lead horses.  He didn’t agree and we continued to fight.

This pace featured a lot of combinations.  I believe I counted lines of eight, possibly more separated by a single stride.  They were incredibly fun, and I’m not sure if Tiger has had much experience doing gymnastics like that before.  He seemed to like them.

The course had a lot of difficult, technical jumps.  The photo jumps were up and downhill.  There were many up/downhill jumps and one was placed at the top of a hill.  We charged up the hill, jumped, and were immediately sent back down the other side of the hill.

For the first time since I’ve had him, he refused not once but twice towards the end.  When I pulled his cross country boots off I saw that he had rubbed the hair off on his hind right leg…probably from all the mud we traversed followed by continued cantering/jumping.  I blame this and our communication troubles for the refusals.

Despite the difficult course and communication problems I am still very proud of Tiger.  I’ve had his shoes pulled for winter but we will hopefully enjoy a spring filled with fun and productive rides.