“Everything You Want Is On The Other Side of Fear”

This is the motto Meredith Cherry is using this year as she approaches the end of her 3rd year of her Centauride.

Meredith is on a mission to raise awareness for domestic violence; and she’s doing so by riding Apollo, her 11-year-old Mustang/Peruvian Paso gelding across all 48 contiguous states.  The 10,000+ mile ride will take her through the end of 2020.

Not too long ago there was a post on our local Facebook horse-people page looking for hosts for Meredith and Apollo as they rode through our region.  New York was her 29th state.  I reached out as did several other equestrian friends.

Unfortunately, plans changed rather quickly and my home was off route. A few of my friends, however, did have the chance to host the team.  Apollo got a couple days of rest only 15 miles down the road from me while my friend, Stacia, showed Meredith around the region. 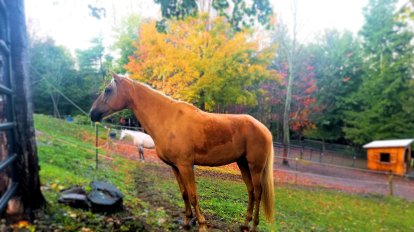 I finally had the chance to meet Meredith and Apollo one rainy day and together we went to dinner at a very popular traveler’s stop, The Man of Kent, in Hoosick Falls, NY.  I loved hearing her stories from on the road, and she lit up when she talked about Apollo.  The bond these two have developed over thousands of miles is admirable to say the very least. 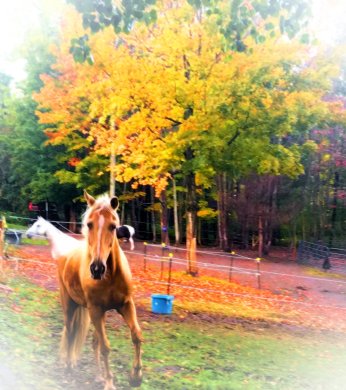 We shared funny stories about our horses being horses.  One story that really stood out was when Apollo peed on a hill and was spooked by the stream running past him….seems a lot like something Blade would do.

I learned (and experienced) about Apollo’s affinity for the camera.  He knows when there’s a picture being taken and he poses accordingly.  He also leans in for selfies.  I’d say that is 100% true. 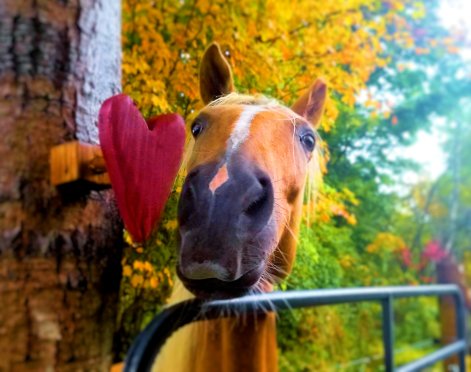 Finally, Friday morning arrived and Stacia wished the pair a safe journey as she ventured on her way towards Vermont.  Stacia wanted the honor of brushing and loving on Apollo before they left and she braided his mane for the newspaper that would be meeting up with them that day.

Meredith is a survivor of domestic violence.  After a long 12 years she escaped her abusive marriage.  You should read her story at Centauride.org but I will warn you it’s not easy to read;  Meredith’s story filled me with many emotions.  Pride/relief that she got out.  Anger that this happened and that the police had done so little to stop it.  Sad and horrified that this happens so regularly without people knowing.  Motivated to do any part no matter how small to help spread the word and get help to those who need it.

Meredith used the funds from the divorce to purchase Apollo on Craigslist when he was 5.  Together they trained, bonded, and planned until 2017 when they set out on their journey from California.  The pair has seen nearly all of the western and midwestern states.  They are now working through New England.  As I write here tonight (Wednesday 10/9) I know that she is somewhere in New Hampshire…her 31st state.   By the end of the month she plans to be in Connecticut after having ridden Maine, Massachusetts, and Rhode Island.  Apollo will be boarded through the winter while Meredith returns home to California and together they will begin again once the snow is gone in spring.  Next year they will conclude their ride making their way down the east coast and back up to finish in Nashville, Tennessee.

I asked Meredith if she had a motto or mantra that got her out of bed and kept her motivated.  As it happens she’s had a theme for each year of the journey.

Learning to find beauty even on the bad days was something that helped Meredith and Apollo make it through their first year.  As the team began their journey they faced many new things together and figured it out.  She helped him ride over bridges, through busy underpasses, and they even faced the empty garbage cans as they rolled down the street on a windy day.  They have dealt with ignorant and inconsiderate drivers.  They have camped when needed.

Meredith endured a long,  painful, and abusive marriage.  Some have never escaped their violent partners.  Others suffer in silence with little hope of truly being free.  Over the four year trip, Meredith will have met and touched thousands of people.  She will have educated the public on how to recognize and help when domestic violence is suspected.  She rides to show the world you can overcome the darkest days and live a life of meaning.

“Everything You Want Is On The Other Side Of Fear”

“Everything You Want Is On the Other Side of Fear.” Meredith meets people daily who tell her “I could never do that.”  Meredith didn’t take this trek lightly and it certainly requires a level head and determination to make it through the worst days.  But she rides with a purpose to spread the word and she sets an example for those who suffer silently.  To those suffering from domestic abuse and are afraid to leave, she leads by example.  Meredith overcame her fears; She escaped her Evil Ex.  She is now seeing the world and raising awareness while doing what she loves most…being with her horse, Apollo. 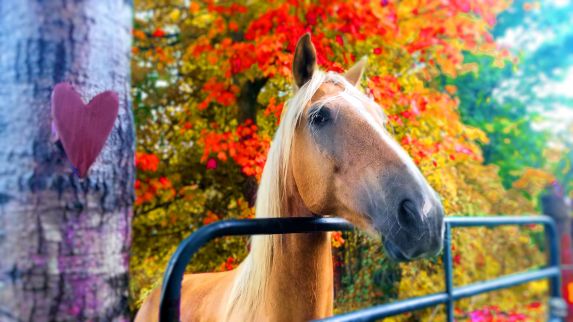 I’ve always found that mantras like this are so useful in helping us achieve our goals.  To stay focused on the big picture.

To learn more about the Centauride please visit:

Finally, if you’d like to support Meredith and Apollo there are many ways to do so (Check out her site).  One of those ways is by purchasing some swag, I’m very excited about the t-shirt I ordered.