This summer has been truly flying by.  I’ve been riding more than ever and really enjoying my time in the sun and with my three amigos.

Summers in New York aren’t as bad if you’re comparing them to summers in the southern states, but they have their challenges.

This year we’ve been extremely fortunately to get nice weather and moderate temperatures (after a month of rain that is).

In New York we aren’t used to super high heat, our blood and bodies are not acclimatized to the random heat waves we often experience.  Sometimes our mornings begin at 50-60°F and ride to 85-90°F by the afternoon.  In only a few hours the temps jump 30-40 degrees and this is common for us.  We enjoy our cooler nights but it doesn’t help us get accustomed to the heat.

We also have high humidity.   That’s what kills us the most.

Occasionally we experience freak heat waves when the temperatures rise above 90-100°F.  Since these waves are infrequent they hit us hard and our animals have trouble adapting too.

When I boarded Blade, the solution was pretty simple.  The horses stay in the barn with a large industrial fan.  The barn was built perfectly to stay cool all summer and bring a cooling draft through the aisle.

Here at home it’s been something I worry about.

Last month our weatherman was calling for a heat wave Friday through Sunday.  So hot even Saratoga race track cancelled races Saturday (and that NEVER happens!).  I knew it was time to make preparations to keep everyone outdoors comfortable.

In the days leading up to the heatwave, I purchased some electrolytes, canned fruit, and apple juice.  In large Rubbermaid containers I combined a can of fruit, a bottle of apple juice, a scoop of electrolytes and water (about 50/50 apple juice/water).

I made another smaller container for the chickens.

I froze the Rubbermaids for about a day.

I also opened up the tack room door and cleared out a few trip hazards.

I took the old water buckets and ran fresh cool water out to the entrance of the shed that gets less sunlight in hopes this would keep the water cooler longer.

When the hot days came I fed the horses early in the morning and hung a few hay bags in the barn.  They happily took to it and spent the hot days under shade.  The door of the tack room provided a bit extra shade and it made a big difference. 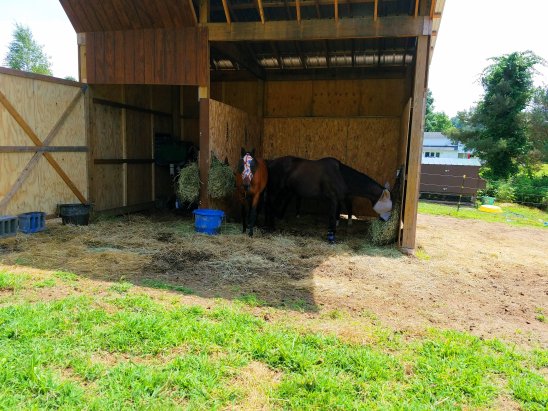 I was happy to have these days off so I frequently came out to check on the boys.  Despite the heat they gladly walked over to say hello.

While I visited with my guys I refreshed their water and offered nice cold water rinses.  The trick of bathing is scraping the water off since it’s actually the process of evaporation that cools them down the most.  VaiVia LOVES bathtime!

By about 3:00PM I brought the horsey popsicles out for their enjoyment.  The boys loved the icy cold treat and the little extras frozen inside. 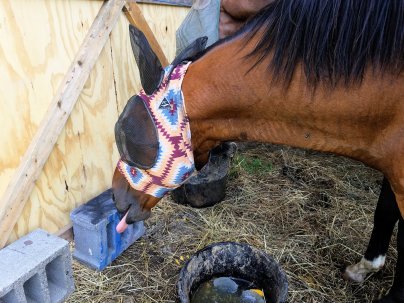 The boys all handled the heat well.  Bardi was very happy to stay inside with me.  He begged relentlessly for an invitation to cuddle on the couch.

But there are more creatures outside that need attention…

I’m new to chickens; I have read that they handle winter better than they do summer.  They flap their wings and take dust baths to cool down.  They enjoy dipping their legs in cool water (no, they don’t but the internet says they do).

To play it safe I covered the chicken run with a tarp to offer a little extra shade so the sun didn’t beat down on them.  They can still get under the coop but this is the “little extra” I do for my creatures.  I also took Blade’s old stall fan and redneck-style mounted it to the door of the coop.  The chickens LOVED this the most!

When it was horse-popsicle time it was also chicken-popsicle time.  The chickens went to town on their ice block!

When I went into the run to place the ice block I was amazed at how much cooler it was inside thanks to the fan.

Where are you from?

How do you handle the heat?

Do you prefer summer or winter?