Anybody else smell that burning smell?

It’s the fire under my arse.

Going into my weekend on Wednesday morning I officially had two weekends left before my property has horses.

This tight deadline has a fire lit under me so I’ve been out making progress daily.

Last weekend I received my round-pen and fought through shale to bury 3 wooden fence posts.  Missed it? Check back at Absorbine Liniment For My Shoulders, Please.

This weekend?  The heat’s been turned up.

Zac was down and out all of last weekend with a terrible bug.  I did my best to make progress but it was slow going.  Zac’s on the mend but he’s still not quite out of the woods yet. Never-the-less we’ve both been making great strides to get our projects accomplished.

Something I failed to comment on last time was that we tried to put our PVC tubes together for the french drain.  I was so excited to share with you…  We cleaned the dirt off the ends of the tubing using paper towels and isopropyl alcohol.  We primed and followed up with the PVC cement.  The next day we wanted to finish up and found the tubes weren’t holding together well.

The PVC tubing Lowes sold us is not PVC at all.

It’s HDPE…high density polyethylene.  No wonder why the cement didn’t hold.  After being initially frustrated and upset we realized that HDPE is supposed to be a better alternative to PVC.  It doesn’t shatter and we’ve read about people using it under their driveways.  Each run we’re doing is 100′ so in order to keep all ten lengths of tubing together we opted to duct-tape the joints so it would at least hold until they are underground.  The slideshow below shows a LOVELY demonstration if you ever do happen to work with PVC (NOT HDPE!).

That brings me to this weekend.

I left work Wednesday morning, saw the horses, then went home.  After a four-hour nap I got up and began working on the farm.  I might work night-shift but I can transition  my body to days quite quickly.  I’ve found some benefits to insomnia.

From my waking at 3pm until Zac came home, probably around 7pm or so…I pounded 20 T-posts into the ground and walked all 15 roundpen panels from our driveway to our backyard.  There was a lot of cursing, particularly due to the snap-on insulators. 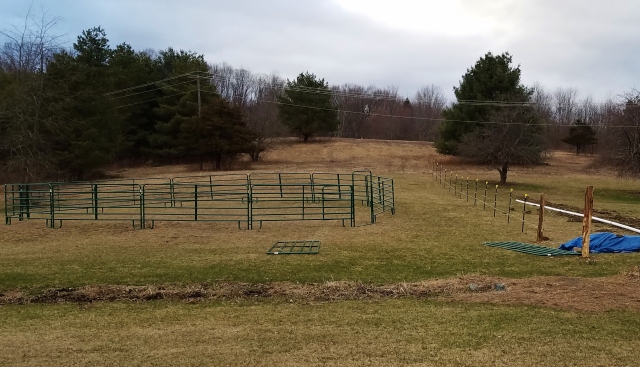 Thursday was a busy day off the farm;  I had to meet with some family, I stopped into a tack shop for some items, and did stalls at Blade’s farm.  I hadn’t planned on making progress that day but I managed to wake up early enough to get out there and screw insulators into our trees and wooden fence posts.  Later that night I shared a bottle of wine and caught up with a riding buddy.

Friday was devoted to progress.  I placed the remainder of the fence posts for the first paddock.  This includes the back line as well as all of the posts that lay between the trees being used as posts.  As I drove the posts I also raked the fence-line clear of debris and sticks.

At about noon I was making my way down the hill through the woods (that part I cleared in the Fencing Update).  I heard someone calling my name.  As I looked up my neighbor was calling to me from her backyard (ours goes around and behind theirs).  I took a brief but welcome break to celebrate her 50th birthday and share a glass of champagne.

Thanks to a rough winter and heavy winds several large trees had made a mess of my trail area.  I used Friday to rake and clear the trail as well.  While clearing the branches and dead trees I began to make a natural looking stick wall off to the side of the trail.  Leaves were raked up into the stick wall to make a more natural barrier.  Until I can purchase a chipper this will make a nice way to handle all the brush.

Driving the fence posts was a breeze, but the raking took a lot out of me…or maybe it was the low blood sugar.  I was out there for 7 hours and most of that time spent was raking and clearing my riding trail.  When Zac got home we used the little daylight left to make sure the trenches are deep enough for drainage.  It was a productive and physically exhausting 9 hour day, and I enjoyed my Redd’s Apple Ale with my easy Chinese food dinner.

Saturday is the last day of my weekend (I typically have every other Saturday off).  Zac and I got up, enjoyed some oatmeal, and got outside by 10AM.  Here in the northeast 2018 has not been very good to us.  We’ve been hit with snow, wind, and cold temperatures.  It wasn’t until Saturday that we actually saw sun and warm weather.  The first thing I did when we got outside was take out the solar fence charger.  From what I understand we need to sit it outside in the sun for at least 3 days to ensure the DC battery is properly charged.  As it happens the next three days are supposed to be perfect.

Not long after we started working Zac’s mom pulled in the driveway to surprise us.  She brought us food, beverages, and most importantly another set of hands to help.

The three of toiled over the trenches, working further to make sure they were deep and clear.  We were challenged by a large stump and by a couple giant rocks.  Both of these interfered with the pipe so they had to go.  It took us quite a while to defeat the obstacles but we did it.  The drainage sleeves were pulled onto our pipes, and a small layer or rock was laid to the bottom of each trench. 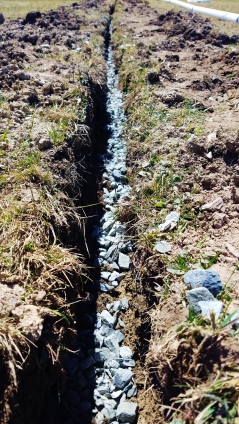 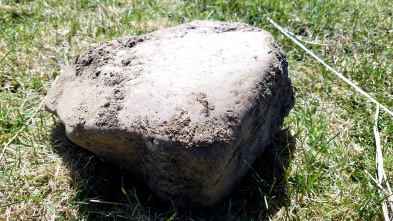 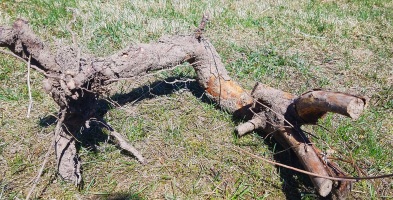 Once the thin rock layer was added we dropped in the drainage sleeve, making sure to keep the holes pointed downward.

Why holes pointed down?

It seemed odd to me, but the answer makes perfect sense.  If we were to place the holes on top, water would need to build up and over the pipe in order for the drain to work.  Because the holes are on the bottom the water will rise up and into the pipe, evacuating to the stream sooner. 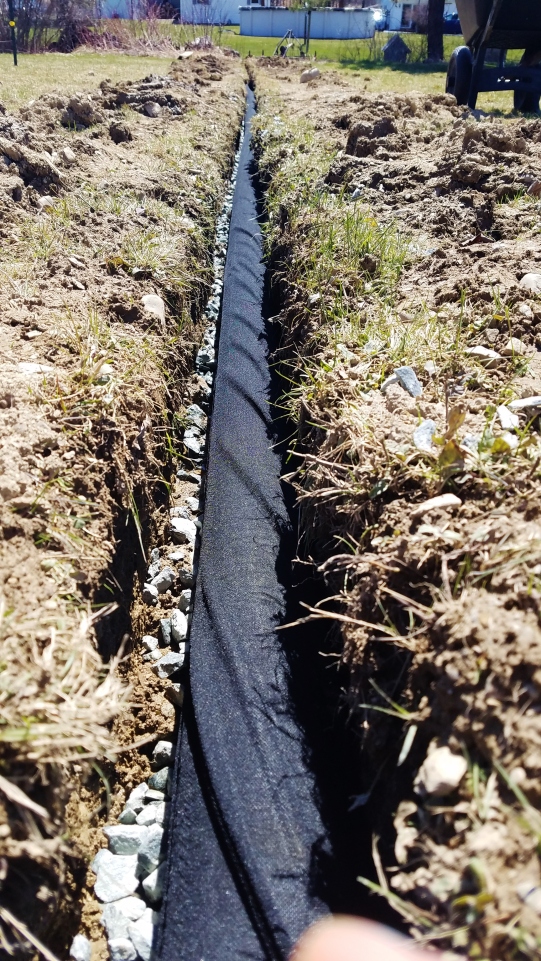 Once the pipe had been laid Zac went over each length to make sure the grade was adequate.  We didn’t go super scientific; all it involved was laying a level on the pipe and making sure the bubble was off-level in the right direction for the entire 100′ length.  Rather than being level we WANT the pitch for the water to run, so as long as the bubble rose to the top of the level we were doing alright. 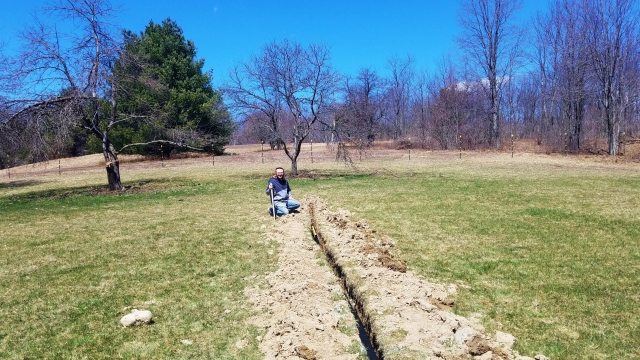 Zac finished “leveling” the first and third pipe (or rather off leveling) so mom and I began to cover it all up with rock.

It was heavy and it was tedious…worse going uphill, but we did it.  At least half of it.

We finished placing stone in the first trench and were completely gassed.   I’m not quite ready to cover with dirt…I’m being conservative with stone until I know we have enough.  If we have more, I’m going to make the stone layers thicker.  We placed dirt and sod over one 10-foot section so we could roll our wheelbarrow over it. 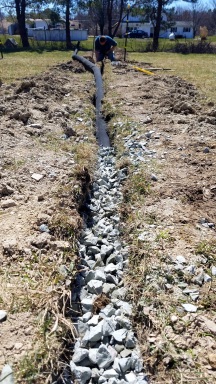 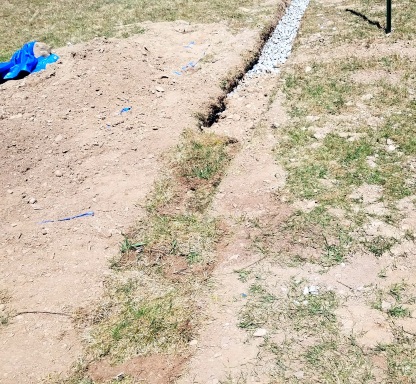 Since it began getting late and it was my last night off, I asked Zac and mom to help construct the corral shelter.  I can finish laying stone alone, but I can’t build this myself.  As it turns out the build was a lovely “cool-down.”  It was an easy build and didn’t require nearly as much muscle as I thought it would.  Within 90 minutes the three of us had the corral shelter built and secured.

I finally understand how to use a tie-down! 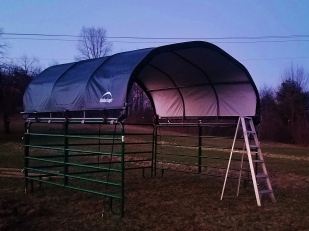 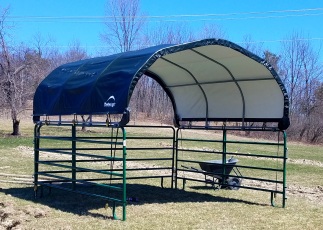 I’ve very excited and encouraged to see this corral shelter built.  The next steps I need to make is finishing the french drains, hang the gate, string the poly-wire, and connect the solar charger.  I’m a bit concerned about the fence.  I ordered a complete grounding rod kit through Horse.com and it has been back-ordered for quite a while.  I’m holding out  in hopes that it will make it’s way here in time (they are usually very good), but I’m prepared to make a last minute purchase at Tractor Supply if need be.  The shipping estimate is 4/24 so I’ll be ok as long as the back-order date is not prolonged.

It’s been a very productive and wonderful weekend.  My body is bruised and beaten.  My hands are raw, but my heart is very full.

I will leave you with a before and after photo of the second clearing project.  Although a smaller area this was densely covered with leaves and dead trees.  I removed the brush, raked, and even knocked some dead trees down to the ground.  Yes, I pushed, pulled and body checked a few trees and took them down, ripping the roots right out.  It came out quite nice.  Zac even mentioned that it’s hard to imagine there were trees there in the first place. 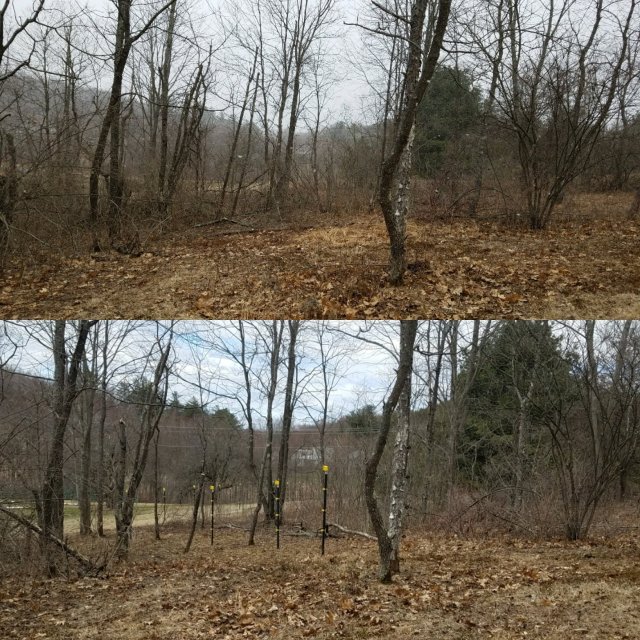